The recent news is scientists have discovered that some snippets of DNA from a fish, they once thought was extinct, can cause mice to grow limbs. This is wrongly being interpreted and hailed by the mass media as evidence that fish evolved legs. Isn't it very interesting that the fish they got the DNA from doesn't have any legs? 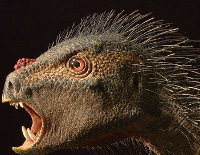 These snippets of DNA from the fish seem to be "triggering" mechanisms. They can only trigger ("turn on") formation of limbs if the genes for limbs first exist, and since genes for limbs exist in mice then these triggering mechanisms, even if from a fish, will work. None of this means fish evolved legs.

Imagine an evolving fish having part fins and part feet, with the fins evolving into feet. Where's the survival advantage? It can't use either fins or feet efficiently. There are absolutely no fossils of fish with part fins, part feet to support that any fish evolved limbs. These fish exist only on automobile bumper stickers!

All real evolution and adaptations in nature are within limits. The genes already exist in all species for micro-evolution (variations within a biological kind such as varieties of dogs, cats, horses, cows, etc.), but not for macro-evolution (variations across biological kinds such as from sea sponge to human). The unthinking environment has no ability to design or program entirely new genes. Only variations of already existing genes and traits are possible. A dog will always be a dog no matter how many varieties come into being.

Evolutionists hope and assume that, over millions of years, random mutations (accidental changes) in the genetic code caused by radiation from the environment will produce entirely new genes for entirely new traits in species for natural selection to use, so that macro-evolution occurs. It's much like hoping that, if given enough time, randomly changing the sequence of letters in a cook book will turn the book into a romance novel, or a book on astronomy!

A major problem for macro-evolution is the issue of survival of the fittest. How can a partially evolved species be fit for survival? A partially evolved trait or organ that is not complete and fully functioning from the start will be a liability to a species, not a survival asset. Plants and animals in the process of Darwinian macro-evolution would be unfit for survival. For example, For example, "if a leg of a reptile were to evolve into a wing of a bird, it would become a bad leg long before it became a good wing" (Dr. Walt Brown, scientist and creationist).

Recently, it was thought they had discovered fossils of dinosaurs with feathers until they found out that many of the so-called feathers were actually scales. The scales took upon a feather-like appearance during the fossilization process. There's strong evidence that other structures interpreted as feathers are woolly plumages and collagen fibers. A few evolutionists (not even most) interpret these structures as proto-feathers and have artists drawing dinosaurs with fancy feathers for magazines and newspapers!

Genetic and biological similarities between species are no proof of common ancestry. Such similarities are better and more logically explained due to a common Genetic Engineer or Designer (yes, God) who designed similar functions for similar purposes in various species. Genetic information, like other forms of information, cannot arise by chance, so it's more rational to believe that DNA or genetic similarities between species are due to intelligent design.

What about "Junk" DNA? The latest science shows that "Junk DNA" isn't junk after all! It's we who were ignorant of how useful these segments of DNA really are. Recent scientific research published in scientific journals such as Nature and RNA has revealed that the "non-coding" segments of DNA are essential in regulating gene expression (i.e. how, when, and where genes are expressed in the body).

All the fossils that have been used to support human evolution have ultimately been found to be either hoaxes, non-human, or human, but not human and non-human.

All species in the fossil record and living are found complete, fully formed, and fully functional. There are no partially evolved species anywhere! There is no macro-evolution in nature.