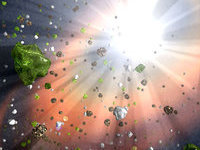 Experts say that solid fragments of the meteor that struck Russia's Urals today will be very hard to find. The shock wave, which caused minor damage in the city of Chelyabinsk on February 15th, was the largest and the only negative manifestations of the falling meteor, Maxim Shingarkin, deputy chairman of the Duma Committee on Natural Resources, Environment and Ecology said in an interview with Pravda.Ru.

"The heavenly body that exploded in the morning of February 15 in the sky over Chelyabinsk, was a satellite of the asteroid, which is now flying in the vicinity of the orbit of our planet," the expert in radiation and nuclear safety said.

In pictures: Meteor explodes above Russia

Shingarkin compared the phenomenon in the Chelyabinsk region with the Tunguska meteorite:

"The most significant manifestation of this kind of celestial objects that has ever been observed by man, was the fall of the so-called Tunguska meteorite. However, even after the fall of such a large object, there were no fragments of the meteorite found on the ground because it actually was not solid. It was a concentration of gas and ice-like substances that exploded in Earth's atmosphere. However, the destruction of that meteorite produced a strong blast wave. The phenomenon that we could observe in Chelyabinsk this morning was similar, although it was of a much smaller scale."

The expert noted that if something caused fear in this situation, then it was the unpredictability of the natural phenomenon:

"To prevent and predict the occurrence of such phenomena is impossible from a scientific point of view. We can detect a large object in space that moves in the vicinity of Earth's orbit, but we can not predict where and at what time a small celestial body may fall down to Earth."

The expert believes that there is no danger in connection with the explosion of a meteorite in the sky over.

"In terms of consequences for the population, the chemical explosion of hydrogen that occurred is completely safe. One should not expect anything from it - the blast wave was the only consequence. On the ground surface, there will probably be minor elements of the solid meteoritic body found: small particles of silicon and iron in extremely small amounts. One shouldn't touch those fragments, if they are found, of course, for it may lead to toxic burns when contacting unprotected skin. But I have to say this once again that finding solid fragments of a meteorite is an extremely rare occurrence.

"Such a body is mostly made of frozen gas - hydrogen, small amounts of water and other impurities. It does not pose any threat. When contacting dense layers of the atmosphere, the body heated up, and the hydrogen exploded. It was a chemical explosion that left almost nothing of the cosmic body. Most likely, the meteor was as big as a mini van. Such celestial bodies do not contain radioactive elements, so one should not be concerned about a higher radiation background in Chelyabinsk. In space, hazardous in terms of radiation objects are large planets and extinct or collapsing stars. There are no other kinds of radiation in space," the expert said.

In the morning of February 15th, a meteor crashed down above Russia's Chelyabinsk. Videos of the incident show the meteor exploding in the sky soon after it entered the atmosphere of the planet. Specialists are currently exploring the area in an attempt to find fragments of the space body.

Author`s name Dmitry Sudakov
*
19:01
PMC Wagner fighters entrench themselves in northern and eastern parts of Bakhmut
17:35
Death toll from Turkey deadly quake rises fast to 1,500 and counting
18:54
Ukrainian soldier uses chainsaw and fire to release US howitzer from ice trap
18:30
Onet: Ukraine will lose in six months due to shell shortage
17:36
Russian troops defeat Ukrainian troops in Zaporizhzhia region
14:50
Number of foreign mercenaries in Ukraine continues growing
14:17
Russians buy more than 50 tons of gold in 2022
13:57
Russia will not talk to Ukraine. Russia will talk to the West
13:34
USA's plan to give 20 percent of Ukraine for peace hoax
12:51
Medvedev: Ukraine as a state to be devastated, go bankrupt and be turned into colony
Armed Forces of Ukraine drop chemical bombs from drones - DPR governor