Oil spilt in Gulf of Mexico found on sea floor

Recently, scientists were able to figure out what happened to nearly a third of the oil spilt in the accident in the Gulf of Mexico in 2010 that have not been found by those engaged in water purification. According to them, the missing "black gold" may be found at the bottom of the bay. The oil got there from the surface of the bodies of the dead and sunken planktonic organisms. 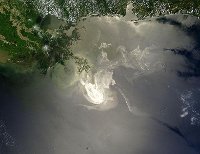 Despite the fact that nearly all experts who studied the effects of the accident that occurred on April 20, 2010, 80 km off the coast of Louisiana in the Gulf of Mexico at an oil rig of Deepwater Horizon said that now the flora and fauna of the Gulf were no longer in danger, some scientists still doubt it. Indeed, the water and coastal areas were cleared of oil, and the condition of the coral reef is satisfactory (these colonies have the lowest tolerance to water pollution). However, the researchers are still racking their brain over a puzzle that so far has not been solved.

According to experts, during the explosion and subsequent leakage, about 600 million liters of oil got into the water. During cleaning of the water and the coast, including cleaning with microorganisms, 450 million liters of oil were removed. Where is the remaining oil? They could not "drift" into the ocean as movement of such a large spot (or many small ones) would be immediately noticed. The search for the lost oil did not yield any results.

No one thought to look for the missing oil at the bottom of the bay. This is understandable since everyone knows that oil, whose density is between 0.7 and 0.9 g/cm3, is lighter than sea water, whose density is 1.025 g/cm3. Consequently, according to the laws of physics, it should float, not sink. This is true, but only in the case where nothing prevents oil from floating to the surface.

The surface layers of the ocean are the habitat of many microscopic plants and animals called plankton. Billions of these tiny creatures constantly filter the water and, therefore, accumulate in their bodies everything that falls into the sea. After dying, they fall to the bottom, dragging along everything they managed to accumulate in their bodies. Hydro-biologists believe that this is the reason why the ocean floor has a number of substances that enter the water from the mainland. That is, it is quite correct to say that the "rain of corpses" functions like an elevator that transports substances from the surface to the bottom.

At the Gulf of Mexico Oil Spill and Ecosystem Science Conference in New Orleans, it was suggested that the missing oil may be found at the bottom of the bay. In particular, a geologist of Eckerd College (USA) Rebekka Larson presented data indicating that in many places the surface plankton and other biological material was deposited at least ten times faster than normal, often leaving a dark layer at the bottom of the bay. She believes it to be a confirmation that dead organisms, sinking to the bottom, carried in their bodies a bit of "black gold." Since there were billions of them, it is not surprising that, together, they were able to drag to the bottom a third of the spilt oil.   In another report, a geochemist of Florida State University in Tallahassee (USA) Jeff Chanton suggested that oil could act as a catalyst, causing the particles to clamp together and sink en mass, creating "dirty blizzard." That is, dead planktonic organisms affected by oil coalesced into large conglomerates that dragged even more oil to the bottom than they would have separately.

Uta Passow, an oceanographer from the University of California, Santa Barbara (USA) confirmed the validity of this hypothesis by saying that in laboratory experiments oil from the accident site indeed caused particles to stick together.  The results of other studies were also presented, suggesting that during the oil spill the layers of water usually obscured by large amounts of plankton were completely transparent - except those that agglomerated particles that sank to the bottom. This is indirect evidence that these microscopic ocean dwellers carried the oil spill with them after death.

However, it would be very difficult to check the validity of this assumption. Near the bottom, the bodies of dead plankton were spread around the bay by deep currents. The oil is dispersed over a large area. Incidentally, this is why, according to the report of the scientists from the College of Marine Science, University of South Florida (USA), led by oceanographer David Hollander, now this oil is not harmful to the creatures leaving on the bottom, because it does not form large spots in sediments.

However, other scientists are not that optimistic. They believe that these spots may exist but are difficult to detect. Due to the fact that oil decomposing bacteria live mostly on the surface, the "islands" of oil may be stored on the bottom for years. Of course, they do not float back to the surface, but can seriously damage the near-bottom ecosystems. In addition, the spots may harm deep-sea fish (Malacanthidae) that lives at a depth and not only eats worms and other bottom creatures, but gets buried in the sediment for mixing.