Study on collapse of Mayan civilization links to climate change

From the analysis of signs found in stalagmites and archaeological evidence, researchers claim that a great drought likely led to the collapse of the Mayan civilization

To understand the potential impact of climate change on modern society, a new study suggests looking at the end of the classic Maya civilization, which ended in an outbreak of famine, war and decadence, while the long-term climate pattern in their region was moist to dry.

An international team of researchers compiled detailed weather records on 2,000 years of wet and dry weather in present-day Belize, where Mayan cities developed between 4 and 10 centuries after the Christian era.

Using signs found in stalagmites, mineral deposits left by water dripping in caves, and the rich legacy of Mayan archaeological evidence, the team reached conclusions that were published on Thursday in the journal Science.

Unlike the current trend of global warming, caused mainly by human activities like the burning of fossil fuels, the climate change in Central America during the classic Maya collapse was due to a natural oscillation in the violent climate.

From the beginning, the extremely humid climate allowed the flourishing of Mayan civilization, but, over the centuries, the climate became drier, according to the Coordinator of the study, the anthropologist, Douglas Kennett, Pennsylvania State University.

The humid periods corresponded to phases of agricultural prosperity, population expansion and the development of civilization, Kennett said by telephone. He said that it also strengthened the power of Kings, who claimed credit for the calm and performed bloody public sacrifices to keep the weather favorable to farming.

But, around the year 660, the weather turned, according to Kennett, and the power of the Kings' game. It was a time of war for scarce resources.

"You imagine the Maya being lured into this trap," he said. "The idea is that if they keep the rain falling, they keep everything together, that's great when you're on a really good period ... but, when things start to go wrong, and the Kings make ceremonies and nothing happens, then people start to question whether they should not be in charge."

The political collapse of Mayan Kings occurred around 900, when a prolonged drought shook their authority.  For over nearly a century, Mayan populations endured a severe drought, lasting from about 1000 to 1100, forcing the Mayans to abandon its main population centers.

According to Kennett, the environmental impact of the drought was exacerbated by intensive use of agricultural land, which caused erosion.  During the dry periods, the Maya responded with intensified agriculture.

When the climate in the area shifted toward drought, in a long-running pattern called the intertropical conversion zone, it exacerbated human impact on environment, Kennett said.

"There are some analogies with this in the modern context which we really should worry about," he said, citing examples in Africa and Europe.

According to him, the current climate change could affect the agricultural systems of some regions, which would cause hunger, social instability and armed conflicts that involve other people, exactly what they believed happened to the Mayan civilization. 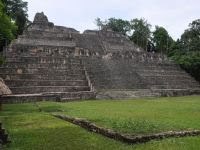