Roman Empire increased concentration of greenhouse gases in the atmosphere

An analysis of Greenland ice showed that even before the Industrial Revolution, human action has changed climate... 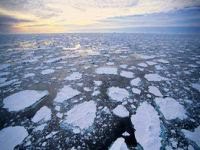 Researchers have found that a significant amount of methane was already emitted into the atmosphere before the Industrial Revolution. From an analysis of ice cores in Greenland, it was observed that over a period of 200 years, which covers the heyday of the Roman Empire and the Han Dynasty in China, there was a great increase in the emission of greenhouse gases. The study challenges the UN view that climate change caused by man began only around 1800.

A record of the atmosphere trapped in ice from Greenland indicated that the level of methane rose for nearly 2,000 years and remained at this higher level for nearly two centuries.

Methane was likely released during deforestation to clear land for agriculture and the use of coal as fuel, for example to melt metal to make weapons, said the study's lead author, Celia Sapart, University of Utrecht, the Netherlands.

"They were already emitting quite a bit per capita in the Roman Empire and during the Han dynasty," said the researcher on the findings of an international team of scientists in Thursday's edition of the journal Nature.

Deforestation rates "had reduced by around 200 AD, which is related to the dramatic decline of the population in China and Europe followed the fall of the Han Dynasty and the decline of the Roman Empire," the scientists wrote.

The emissions caused by man 2,000 years ago, when the world population was estimated at 300 million, were noticeable, but tiny compared with current levels caused by a population of 7 billion.

Sapart estimated that methane emissions up to 1800 were about 10% of the last 2,000 years, while 90% occurred after the Industrial Revolution.

Methane is generated by human sources, including the burning of forests and fossil fuels, rice paddies, landfills or livestock. Among the natural sources are swamps, forest fires and volcanoes.

The findings of the Sapart group question the position of a UN panel of climate scientists, in which climate change caused by humans began in the wake of the use uf fossil fuels during the Industrial Revolution.

"The pre-industrial era was not a natural time for the weather - it was already influenced by human activity," she says. "When we make climate predictions for the future, we have to think about what is natural and what we add. We have to define what actually is natural," she affirmed.

Scientists, located in Holland, Switzerland, Denmark, the United States and France - have observed a second increase in methane in the Middle Ages, coinciding with a hot period recorded between 800 and 1200, which also observed Europe's economy coming out of the Dark Ages.