The controversy around the mysterious object, which was found in August of last year on the bottom of the Baltic Sea, continues. Some experts believe that the finding has absolutely nothing to do with unidentified artifacts from space. One of the versions says that it is a Nazi secret military base; another one says that it is nothing but a piece of rock. 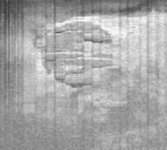 The news about the alleged discovery of the UFO was unveiled to the world by Swedish researchers Peter Lindberg and Dennis Asberg. Last summer, the two men were searching for Swedish merchant ships that had been sunk by Nazis during World War II. Sonar found a mysterious round object with the diameter of about 60 feet (18.2 meters) on the sea floor, at the depth of 300 feet. It was impossible to reach the object.

"We come across many strange things in our work, but I have never seen anything like this during 18 years of professional experience," said Lindberg.

Ufologists immediately hypothesized that there was a flying saucer resting on the bottom of the Baltic Sea. The history of UFO observations says that unidentified flying objects were often seen above the water, and even flying out of the water. Quite often, "flying saucers" appear near ships and aircraft. It is also possible that the alien spaceship crashed into the sea.

Some researchers blame UFOs for mass deaths of marine creatures. It particularly goes about dolphins and whales. In Tasmania, for example, 2,768 whales and 146 dolphins in total beached themselves during the last nine years. American ufologist J. Rossel gathered statistics that said that marine animals commit suicide most often in the areas where unidentified flying objects had been observed.

Back to the "Baltic anomaly." In June of this year, Lindberg and Asberg returned to those places to explore the finding. They managed to film it on video. A month later, the researchers received the sonar data that led them to believe that it was a top-secret Nazi base from WWII equipped with anti-submarine weapons.

According to retired Swedish naval officer Anders Autellus, the construction measuring 200 by 25 feet with double concrete walls, could be used during the war to block the signals of Russian and British submarines cruising in the area.

Meanwhile, professor of geology at the University of Stockholm, Bruchert Volker, believes that "the Baltic UFO" - is just a rock. The scientist came to this conclusion after he studied the samples from the place of the discovery. "Since the Baltic Sea appeared as a result of melting glaciers, these rocks were probably formed around the same time. Perhaps, it was glaciers that brought these rocks to the region," the professor believes.

However, Bruсhert did not say anything about the fact that satellite phones and cameras stop working near the site. In turn, Bruchert's colleague, geologist Dan Fornari, believes that one should not jump to conclusions, but wait for the results of additional analyses.

"I would not attach too much importance to any formulation. At least there is one plausible explanation: the object is a Nazi base on which anti-submarine weapons are installed," he said.

Noteworthy, this is not the first "UFO" incident in the area of the Baltic Sea. On July 27, 2008, a mysterious silver disc was seen flying for nearly one hour above the Blue Lakes (near Kaliningrad). The people resting on the beach started waving their hands to the object: they were strangely convinced that they were about to come into contact with aliens. Many filmed the anomalous phenomenon on their phone cameras. However, the Russian Emergency Situations Ministry and the Baltic Fleet Command refused to comment the incident.

The very nature of unidentified flying objects remains unclear to modern science. The name refers to any object of unknown origin that appear within people's sight. Before ascribing their origin to the activity of extraterrestrial intelligence, one needs to look for more realistic explanation. After all, things very often turn out to be much simpler that we consider them to be.