Elevator to the Moon to become reality in 8 years

The LiftPort Group, a US-based privately-owned company, with former NASA researcher Michael Laine at the head, is planning to build a space elevator to the Moon. The idea of ​​a space elevator stipulates a rocket-free way to transport people and cargoes into orbit with the use of a special cable. 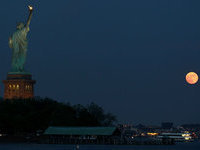 The California-based company founded by former NASA engineer has developed a cheap and easy way to get to the lunar surface. The project is based on a special ribbon cable, on which transport modules and autonomous robots will travel. At first, the researchers plan to test the system on the planet: the test elevator will be 2 kilometers high. Afterwards, a working system will be built. Initially, the company will use a space elevator to connect the Moon with a specially designed space station. The station will then be connected to a platform on Earth.

Company President Michael Laine believes that it will take eight years to build the elevator. The construction will require only a single launch of a spacecraft that would technically resemble the famous Soviet Sputnik-1. It is assumed that such an elevator can already become a part of modern-day reality taking into consideration the current level of the technological development.

The space elevator, scientists say, will help people build manned bases on the Earth's natural satellite and organize the extraction of helium-3 there - a raw material that will solve global problems of the shortage of energy resources, writes EnergySafe. According to most pessimistic estimates, the reserves of helium-3 on the Moon will be enough for Earth's population for at least 1,000 years.

LiftPort Group does not doubt its success. The company is going to attract potential investors after the tests that will be conducted on the funds raised on the Internet. NASA, where Michael Lane worked before, has already evinced interest in the project, reports FreeSMI.by.

The idea of ​​a space elevator is not new. For the first time, it was put forward by Konstantin Tsiolkovsky in 1895. Afterwards, the idea received detailed analysis in the works of scientist Yuri Artsutanov,  the Rossiyskaya Gazeta wrote.