The mysticism and curse of 33rd parallel

It is difficult to know for sure, but the 33rd parallel plays a huge role when it comes to disasters in the modern world. Dallas with its car accidents, Tripoli with the "Arab Spring," Baghdad, Damascus, Kashmir, Tibet, Nagasaki - they all are located on the 33rd parallel. Is it a coincidence that occult sciences attach special importance to number 33? 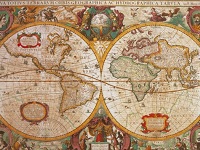 All you need to do is to have a look at the map of the world. Look at the significance of the parallel in the Masonic country of General Pike and green bank notes. Take a look at the location of the unfortunate city of Dallas known for its car accidents (this is the official point of view) and its president, who was murdered by some ... Wizard of Oz 22/11. Look further and find the city of Tripoli in Africa. The city became widely known for its "Arab Spring." In Asia, there is also Baghdad, famous for its tales of Scheherazade with the use of weapons of mass destruction.

You can also find the poor city of Damascus, which, as Prophet Isaiah predicted (chapter 17), would be destroyed. Look again at the map to find out that Iran and its good city of Isfahan are located on the parallel too. If you continue the Masonic journey around the world, you will cross the "peaceful" Afghanistan and Kashmir, known for its local wars. And of course, there is Tibet.

An American commentator - a friend of mine - also insists on the significance of the city of Phoenix, Arizona, that sits on the 33rd parallel. He connects Phoenix with Lebanon, Tyre, good old Phoenicians and Hiram, who built the famous temple.

The thirty-third degree is the highest degree in Freemasonry; the addition of number 11 and 22 (look in the "Dictionary of Numbers"); the number of Dante songs; the king of the universe and the spiritual fulfillment. All this is about the key number in the history of the new world order. The sum of these numbers - 22 and 11 in the Tarot is the blade of force and mate.

After the venerable George H. Bush announced his intention to cooperate with the British, oil monarchies and European socialist parties (including the one that belongs to the pyramidal and very well dedicated Mitterrand), the Western powers started moving from war to war, from one occasion to another.

Someone talks about oil - the old "hellish water" - to explain the execution of Gaddafi, the destruction of Syria, the capture of Baghdad, the future destruction of Iran and the rest of the world in the name of democracy, human rights and the enormous debt. Why not talking about Illuminati and mentioning a few examples in history? Take a look at the French Revolution - it is also associated with very specific political and financial intentions.

Just listen to what French national genius Alexander Dumas says. Dumas understands the causes of the French Revolution better than other history teachers. In "Joseph Balsamo," he wrote the following lines, which could be attributed to some grand Count Cagliostro:

Dumas perfectly described the desire to liquidate or dissolve humanity, and it was described 200 years before Bush Sr.:

"The nations make one huge army. Born at different times and in different circumstances, they took their places in the ranks and should arrive, each in turn, to the purpose for which they were created. They constantly march, even if it seems that some of them rest.  They retreat for incidental reasons, not because they go back; they gather strength before overcoming an obstacle or crushing the difficulties faced."

Who is this Illuminati? This is a dreamer who plants his policy of destruction depending on the parallel or the number, which he considers important. Nagasaki is on the same latitude with Los Alamos nuclear desert! Truman was the 33rd President of the US!