Data from the National Snow and Ice Data Center reveals shocking statistics which point towards a record low ice coverage of the North Pole with five more weeks of the ice melt season still to come. Was the intense storm over the Arctic Ocean to blame or is there something more sinister? 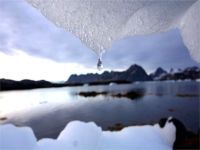 According to the latest report from the National Snow and Ice Data Center (NSIDC), the extent of the Arctic sea ice in the first fortnight of August was below the record low daily ice extents registered in 2007 and by August 13, "ice extent was already among the four lowest summer minimum extents in the satellite record". The report states that there was a rapid ice loss between August 4 and August 8, which coincided with an intense storm in the Arctic Ocean.

The data from the NSIDC, from the United States of America, is backed up by the Norwegian Data Center, Nansen Environmental and Remote Sensing Center, whose spokesperson, director and founder, recently declared in an interview to Reuters news agency that the ice cover "has never measured less than it does today".