Anatomical problems were found in insects in the region up to the third generation, and experiments showed that radiation was involved... Genetic mutations were detected in three generations of butterflies in the vicinity of the Fukushima nuclear facility in Japan, Japanese scientists reported, which raises fears that radioactivity could be affecting other species.

Almost 12% of small blue butterflies of the family Lycaenidae exposed to radioactivity while still in the larval stage during the nuclear disaster in March 2011 developed anomalies, especially smaller wings and a malformation of the eyes, scientists said.

Insects trapped in an area near the center of Fukushima Daiichi two months after the accident were transported to a laboratory for breeding purposes. In total, 18% of the next generation developed similar problems, said Joji Otaki, a professor at Ryukyu University in Okinawa.

The ratio further increased to 34% in the third generation, although scientists used healthy butterflies from another region to mate with insects from Fukushima.

Six months after the disaster, a new batch of butterflies was captured near Fukushima Daiichi, and this time the abnormal rate of the next generation was measured at 52%, Otaki said.

Japanese scientists also did an experiment with a population of butterflies not affected, which were exposed in the laboratory to very low doses of radioactivity, and found the same proportion of anomalies recorded in the first generation of Fukushima butterflies.

The study results were published in the journal, Scientific Reports.

"We have reached the clear conclusion that the radiation emitted by the central Fukushima Daiichi facility affected the genes of the butterflies," said Otaki.

The scientist, however, cautioned that the results should be considered with caution because the observed effect has been proven so far only in butterflies, and not on other animals or humans.

The team plans to conduct further experiments with other animals.

No person was killed by the direct action of radiation released by the Fukushima accident, but the inhabitants of the region fear the long-term effects.

Many recall that the effects of radioactivity was transmitted to several generations from Hiroshima and Nagasaki after the dropping the atomic bombs by the United States in August 1945, in the last days of World War II. 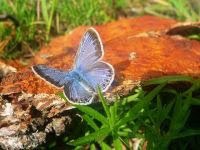