Supposedly extinct species of rhinoceros is seen in Indonesia

You could not see rhino 26 years ago in Mount Leuser National Park, in north Sumatra...

The rhinos, six females and one male, were filmed by 28 infrared cameras installed at the National Park in Indonesia between 28 June 2011 and April this year.

The seven Sumatran rhinos were filmed by the hidden cameras in a National Park in Indonesia, where it was feared that this species was extinct, according to a park conservationist.

The number of rhino in Sumatra decreased by 50% over the past 20 years, and it is estimated that approximately only about 200 remain 200 in whole world.

The Sumatran rhino is the smallest and most primitive of all the rhino species in the world. Since 1996, it has been categorized as critically endangered, or just a step away from being extinct, on the International Union for Conservation of Nature's Red List.

The Leuser ecosystem is home to some 710 animal species, of which 180 have been declared endangered.

The Indonesian government, in partnership with several conversation organizations, has declared 2012 the International Year of the Rhino.

Wildlife trade is estimated to be the third-largest form of illegal trade after drugs and human trafficking.

Translated from the Portuguese version and appended by:
Lisa Karpova
Pravda.Ru 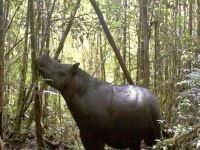