After attacks, France will hunt sharks in Reunion island

After series of incidents, residents asked for help from the authorities to hunt for the fish, which have multiplied in recent years...the flat-head shark is the species most involved in attacks on humans.

France will hire fishermen this week to kill about 20 sharks off the coast of Reunion Island, French territory in the Indian Ocean, hoping to understand a series of attacks in the Surfers' Paradise.

Two people were attacked by sharks in less than a week. One of them, bitten on Sunday, barely survived, but lost a hand and a leg. The other died on Monday (30th) last week.

Municipal authorities of Saint-Leu, near the site of Sunday's attack, called for the top-level governments to cull populations of sharks and flat-head tiger sharks, which have multiplied in the last year.

About 300 residents and surfers staged a protest in front of the main police station of the island, calling for the slaughter of the sharks.

The French government, however, ruled out a general slaughter, saying that scientific studies need to be performed on a toxin that exists in the flesh of sharks, and that discourages fishing. 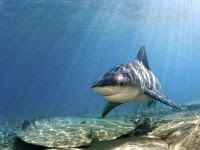