Where does Baphomet come from?

The spiritual Catholic Knights Templar Order existed for almost 200 years. For seven centuries that have elapsed since its elimination, the Order seems to be of great interest not only to professional historians. A lot of myths have been formed around the Templars. In this article, we will have a look at the most typical and most popular of them. 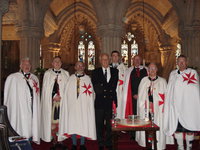 There are many factors that led to the appearance of the myths, but many of them were made up by the Knights Templars themselves.  The bull of Pope Clement V from the 1312 Vox in excelso, about the official dissolution of the Knights Templar notes the mystery that shrouded the swearing-in ceremony of the order and the oath not to say anything about the membership. Noteworthy, the main reason for the dissolution of the Order was the accusation of the abandonment of Jesus, which they demanded from new brethren at the swearing-in ceremony.

The official charter of the brotherhood of the Knights Templar, for example, prohibited disclosing what was discussed at the meetings of the chapter. It brings up the ridiculous and absurd secrecy of the Soviet era that could at times look like a joke. It was just enough to get together behind closed doors. However, the Knights Templars, a little fixated on secrecy, would go to the middle of nowhere and carefully select a small circle of insiders, having trumpeted their mysteriousness everywhere.

It was total and not always explicable secrecy. It was forbidden to own a copy of the official charter without a special permission, so it did not fall into the hands of the people who were not involved in the affairs of the Order. Historians are puzzled about this fact. The official statutes of the charter of the Order were quite clearly written. They contain no traces of double interpretation, nor do they give a reason for perverse interpretations.

Here is a more serious ban for all Templars. It was forbidden to confess to other priests, except for the chaplains of the Order. They could not confess to fellow Templars, who were also tied with a sacred obligation to observe secrecy. When first accusations began to appear against the Order of the Temple in 1307, this practice, among others, was also a part of the accusations. This was observed in other monastic orders too, although it was not a prerequisite.

And, of course, as they say, there is no such thing as former Templars. Once a Templar, then it is for good. Those who expressed a desire to voluntarily leave the Order of the Temple would be regarded with great suspicion. When such things happen among the people engaged in secret activities such as intelligence or secret societies, where one has to go through initiation - they are considered as something usual. However, it is believed that the Order of the Temple was not a usual order. Therefore, one may assume that the Order had its own elite, consisting of dedicated individuals. The order was dual in its nature, it was a state within a state and a secret organization at the same time.

The most intriguing accusation against the Templars was about their idolatry and the habit of following pagan rituals. They supposedly were worshipping a head, probably a bearded one. There is a theory according to which Bafomet or Baphomet is a distorted Arabic word 'abufihamat' or 'bufihamat,' which means "the father of understanding." In the Sufi tradition, the notion of 'al-ral fahmat' (the head of knowledge) is associated with the process of understanding by the initiate. At the beginning of the XIX century a Western Arabist suggested that 'Baphomet' was the distorted version of the word 'Mohammed.' He discovered that the word 'bahommerid' translates as "mosque."

The German Orientalist said that Baphomet originates from the Arabic 'bahumid' - a 'calf.' Hence, the Knights Templar were worshiping a golden calf. Since this word was not found in dictionaries, the Orientalist said that it appeared among the Gnostics as a combination of two Greek words 'bafe' ('baptism') and 'meteos' ('initiation'). In general, only the list of all hypotheses would take more than one page of fine print.

Maybe there is a "pearl" of truth in the pile of versions. Neither the prosecutors of the Order of the Temple, nor the accused Templars uttered the word 'Baphomet'. It was occultists and historians who spread the word around. It came to light from the protocol of interrogation of a sergeant, who was accused of "worshiping a Bafomet image."

The sergeant spoke his native dialect of Occitan, in which Mahomet sounded like Baphomet - it was incomprehensible to the natives of northern France. Being not a very educated man, the sergeant was unaware of the fact that Islam prohibited to depict people and animals.

No head was found during the raids on the homes of the Templars, except for one single head. The Guardian of the Temple "brought a large, nice head made of gold-plated silver to inquisitors. The head had a woman's face and contained skull bones, placed in the folds of a piece of white linen as well as other fabric of reddish hue that covered the canvas." It had the inscription on it: "Caput LVIII m".

It goes about a very ordinary reliquary in the shape of a female bust that was used in Orthodox cults of saint wives and female martyrs. No secrets at all. Later, researchers showed an association of the legends about the Templars with the ancient Greek mythological cycle of Perseus and Medusa's head.