As it turns out, walking on water is not that difficult. The success of this undertaking depends on how much corn flour starch you have. If you have enough of this substance, you can easily impress your friends with a simple but a very effective trick that can be a highlight of any pool party. 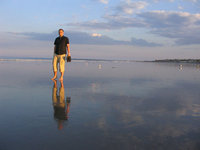 Strictly speaking, it was a pool party that started it all. A video posted on YouTube showed people walking on water in a pool. Nevertheless, scientists from the University of Chicago unraveled the trick at once. They paid attention to the fact that the people walking on the pool were moving in a strange way. They were not actually walking - they were moving in small jumps, as if they were trying to hit the water surface with their feet.

A closer look at the video also revealed that the water itself was acting strangely too. The water was like a trampoline, tossing the people up after every jump. This led researchers to suggest that the "magicians" somehow turned the water surface in the so-called non-Newtonian fluid.

The non-Newtonian fluid is a suspension that includes large particles (common dirt is an example). Due to the presence of large particles, the fluid may exhibit unusual properties and behave like an elastic solid body, for example. This is exactly what happened to the water surface in the video.

The researchers conducted a simple experiment. They added a certain amount of cornstarch in a bowl of water. After the paste evenly distributed over the surface, they hit the surface several times with a metal rod. The effect was strange, but quite predictable: the suspension was actively pushing the rod away. Afterwards, the scientists lowered their hands in the solution several times. In this case, the human hand was passing through the surface - it was drowning. "If you tried to hit the suspension, you could simply break your wrist," Scott Waitukaitis, a physicist with the University of Chicago said.

Once the hypothesis was confirmed, the researchers decided to find out why the suspension of water and cornstarch behaves this way and not another. To do this, they repeated the experiment, but used X-rays to analyze the structure of the solution.

It turned out that an impact on the water surface causes the particles of starch suspended in the liquid come together very quickly. The phenomenon occurs because of the influence of tension forces. This process is very similar to the formation of a snowdrift in front of a to snowplow. The сondensation that occurs on the water surface is so strong that can repel objects with the force of stiletto heels pressing on the asphalt.

When the impact on the suspension is soft and smooth, the particles simply do not have time to quickly stick together to create condensation. This is the reason why the hand passes through the surface.

Based on the X-ray analysis, the researchers designed a computer model of the process, which showed: the sharper the attack on the surface of the suspension, the harder it will push away "the offender". In other words, a safe walk on the surface of the mixture of water and cornstarch will not work even on high heels, but a skipping run is quite possible.

The researchers say the discovery of the mechanism of behavior of starch and water may help engineers create "liquid" body armor. It should be a suspension consisting of liquid and poly-parafenilen terephthalamide (better known under the name Kevlar). The properties of this vest will make it superior to all modern body armor - it will be several times stronger and lighter.

At the same time physicists say that experiments with Kevlar suspensions may not be successful. After all, the properties that can be observed in some solutions may not appear at all in the other suspensions, especially when it comes to non-Newtonian fluids, the properties of which are unique. For example, no one knows why cornstarch begins to thicken as a result of an impact, but the suspension of peat in swamps, or ketchup, on the contrary, resolve.