All floods and earthquakes caused by human actions?

Any cataclysm causes a great deal of rumors and the most controversial speculation. For example, victims of the earthquake in Armenia in 1988 sincerely believed that right before the shocks a silver plane appeared in the sky and something was dropped from it. This is a simple property of the human psyche - to try to explain blind violence of nature by human actions and find the cause that triggered the cataclysm. You cannot flog the ocean for drowning the ship.

The events in and around Krymsk go far beyond the standard reactions of shocked people to a disaster. The city in the Krasnodar region, without exaggeration, has become a ground for testing political strategies. It is already clear that there are organized groups of manipulators using the emotions of the locals in their own interests. 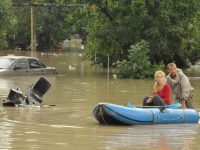 The rumors of draining water from the reservoir as the cause of the catastrophic floods that enveloped the city are easily explained. This is very similar to the silver airplane in the sky of Armenia that was witnessed by thousands in various parts of the country. The people were genuinely indignant when rescuers tried to appeal to their common sense.

It is more difficult to explain the emergence of a statement of a Krymsk resident Julia Andropova on the morning after the flood (July 7) that said: "Yesterday at 21:53 Krymsk took the hit!" The woman, referring to her father who worked at Neverdjayevskaya power station, revealed the details of how the floodgates were opened and a catastrophic wave was directed at the city - "to save Novorossiysk."

Novorossiysk is separated from Krymsk by a mountain ridge, the Neverdjayevskaya station does not have locks that can be opened, the electricity supply to Krymsk was resumed on July 8-9, cellular communication was restored on the 9th, but these details have not been taken into account. The statement was very popular online, and was quoted by electronic and print media, the rumors have returned to the city endowed with many details and backed up by the authority of the media.

Today, despite all rebuttals, despite the fact that an independent group from Krymsk has circled Neverdjayevskaya dam reservoir on an airplane, the attempts to fully refute the belief of the people that a wave was directed at them intentionally, have failed. People started talking about other reservoirs in the region from which the water could go to town. They began to look for other causes of flooding, understanding that the "Novorossiysk" theory had failed. Other theories included "drained water from the site of Grushevka Rosneft", "tried to save Putin's dacha in Praskoveevka," etc.

Social networks played a significant role in spreading these rumors. Suffice it to say that bloggers are still looking for lies in the reports on the absence of locks at the Neverdjayevskaya station, saying: "We were lied to, locks must be there". It seems that if social networks existed in 1988, the man-made theory of the earthquake in Armenia would have become self-sustaining throughout the country.

Yet, not everything has to do only with the specific network conspiracy. The events have obvious features of a planned political campaign, and for the first time in modern Russian history, it goes far beyond the blogosphere and some opposition media.

Earlier this week, leaflets were spotted in Krymsk depicting laughing portrait of Putin and the slogan "Your problems only amuse me!" This could be perceived as an idiotic act of a citizen obsessed with politics. However, on July 9 unidentified vehicles in the streets were announcing to the local residents that the second wave of floods was coming. Allegedly, the dam at the reservoir Neverdjayevskaya broke down and another multi-meter wave of water was approaching the city.

These "warnings" have generated a serious panic in the city, people rushed to the roofs of the houses, traffic jams emerged on the exits from Krymsk. Local authorities tried to calm the citizens down for hours, let the police cars on the streets urging people not to give in to provocations, explained that there was no second wave and the reservoir was fine.

Provocateurs were not found. In a dilapidated, panic-ridden city, the search and identification of criminals has become a real problem. However, the mere appearance of such "warning vehicles" is remarkable. It means only one thing - there is an organized group of provocateurs in Krymsk seeking to undermine the situation, politicize the disaster, and direct anger and frustration of people in the direction advantageous for the manipulators.

It is hardly likely that anyone really plans to raise a wave of protests in the small town in Kuban. Most likely, the spin doctors in Krymsk are training, testing the actions in crisis situations. The destroyed city was turned into testing grounds, which makes this situation even worse.