Congratulations to the scientific community at having discovered the God particle. Well, not discovered...found, because they discovered nothing, the particle always existed. In fact the find is as yet no more than a supposition and the further we claim to have advanced, the more our ignorance is unveiled. 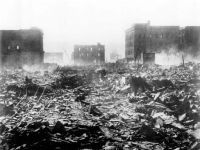 For a start, the claim Eureka! bawled out from the Fermilab (Fermi National Accelerator Laboratory in Illinois, United States of America) is as yet premature, since the claim that the subatomic God particle, or Higgs' boson, had been found was followed by the claim that "strong evidence" had been discovered...but that it would be necessary to do more research in the European Large Hadron Collider to confirm any "discovery".

So, what has Fermilab actually "found"? After spending countless zillions of dollars playing around with particles, oblivious to the dangers involved in creating a black hole, they now find, after two experiments known as CDF and DZero, that if (I repeat, if) Higgs' boson exists, it has a mass of between 115 and 135 gigaeletronvolts (GeV/c2), around 130 times the mass of the proton. (The GeV is a measure for subatomic particles, equivalent to the approximate mass of a proton). There is still a one in 550 chance that what they claim to have found does not exist ... and anyway all they really have is a 60% statistical chance that they have found anything at all.

Despite the desire to spill the beans on the Fourth of July, can we really say that the physicists at Fermilab have made any tangible progress towards anything, after wasting money at the Tevatron facility since the 1980s? Billions of dollars later, on the other side of the pond, at Europe'a CERN, responsible for the Large Hadron Collider, comes the statement that they are not ready to declare yet whether the particle has been "discovered". The nearest they can get is to say that data obtained reveal "vestiges" of Higgs' boson but that it has yet to be seen, despite having stated in December 2011 that the particle was hidden in a band of mass, attributing to it a mass of between 115 and 127 GeV.

In fact, Higgs' boson has never been anything more than a theoretical model developed by one Peter Higgs in the 1960s, trying to explain why some particles have mass and others do not. Some scientists go further, claiming that if the model is proved in practice, then it can explain the origin of the Universe.

So how can the teams, ATLAS in the USA and CMS in Geneva, each one composed of thousands of scientists spending God alone how much money, make sweeping statements that they know how the Universe was formed, if they have at best a slightly better than half statistical chance that they have found the practical existence of a theoretical model?

May I postulate they wouldn't know God if he hit them in the face with a wet fish and may I request they stop playing around wasting millions of dollars on their silly little games before they do something serious like create a black hole and all disappear into it? Or maybe that wouldn't be such a bad thing...