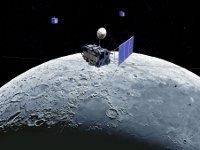 Excalibur Almaz previously acquired four capsules and two decommissioned space stations "Almaz" from Russian military-industrial corporation NPO "Mashinostroenie" and equipped them with modern electronics and advanced software. Each of the capsules, one of which is exposed for all to see near the hangars of the Isle of Man, can deliver to the space station a crew of three people and ensure their return to Earth.

Space tourism is one of the most promising areas of commercialization of space and attracts private firms in this high-tech sector. It is believed that in the coming 18 months, sightseeing commercial flights into space will be streamlined, and the price of trips to the stars will be approximately $200,000 dollars. However, in this case we are talking only about the orbital and suborbital flights that do not require the use of rocketry and space centers.

They can already be implemented by individual companies. This segment is being actively developed by several foreign firms. Virgin Galaxy company has already collected from future customers over $60 million. There are no Russian representatives in the most technologically achievable business niche at this time.

In the area of space tourism Russia competes exclusively in the "projects of the century", for the most part improvised. Head of Space Adventures Company Eric Anderson promises commercial space flights to the Moon and back by Soyuz in 2015. Tickets are available for $150 million apiece.

A consultant to Excalibur Almaz, Russian cosmonaut Valery Tokarev, indicated that there were some unsolved problems. Crews of space stations limit their time of stay in Earth orbit to the period of 200 days because of the damaging effects of radiation. At the same time, the offered trip to the moon will be very leisurely: the flight to the satellite and back lasts about eight months.

That is, the "moon program" is simply a beautiful fairy tale.

In May, the International Space Station docked with the first private spacecraft Dragon. This is an event of historic proportions: the implementation of such projects has so far been managed by only the most powerful nations of the world - the U.S., Russia and China.

NASA, overcoming the dependence on Russian trucks, decided to give near space at the mercy of private traders, expecting non-trivial solutions and a range of suitable products.

Competition for the creation of the aircraft was won by SpaceX that launched the Dragon, and Orbital Sciences Corporation that late in the year will send a cargo ship Cygnus to the ISS. If its journey is successful, Roskosmos will have to engage in a full-fledged space race - or die a long and expensive death, similar to that of the Soviet auto industry.

SpaceX owns a launch vehicle "Falcon-1" for satellite launches and more powerful two-stage "Falcon-9" for the Dragon spacecraft. "Falcon-9" is an analog of the Russian" Proton-M.  Apparently, SpaceX expects to extend its contract with NASA to 3.1 billion, and plans to launch its own manned space vehicle in 2015.

No less agile was Orbital Sciences Corporation. The firm is famous for its boosters "Pegasus" launched from the plane.  The Cygnus truck created by the firm would be cheaper and simpler than Dragon and is not intended for human spaceflight.

As a result, by the end of the year there will be two trucks at the disposal of NASA. They can leave the Russian competitors without orders. "Dragon" can carry up to seven astronauts compared to three that "Soyuz" can transport.

At the same time, in terms of load capability the new device exceeds the transport spacecraft "Progress": the former can lift into the orbit six tons of cargo and return three tons, and the latter - only two tons. SpaceX aims to reduce the price of delivery to $2,000 dollars per kilo. This would lower the cost of suborbital flights four times (up to 50,000 dollars) and will make presence on the ISS or similar stations feasible for thousands of wealthy people.

Now the price of flight as an astronaut to the ISS on Russian ships is about $63 million dollars. Private companies in the near future promise to carry passengers only for $20 million dollars.

In fact, Americans will have to use the services of Russian orbital cabs more than once. A competitive market for orbital traffic is formed before our eyes, and the Russians are being pushed out of it.

Head of Russian Federal Space Agency, Vitaly Davydov, believes that flying SpaceX ships to the ISS will reduce the load on the "Energy" corporation that released "Progress", which will give it the opportunity to begin work on the new Russian spacecraft.

However, the future still belongs to reusable carriers, and any noticeable progress in the development of such devices promises its developers laurels of the pioneers of outer space. At the time when the Americans within a couple of years solved the problem of creating space truck by attracting private companies with visible results, the Russian Federal Space Agency only reported on plans for a new spaceship.

Now in the West at least seven companies rushed into space. This is SpaceX, Virgin Galactic, Space Adventures, Planetary Resources, XCOR Aerospace, Blue Origin and Sierra Nevada. Some of them have common roots, but it does not change the essential point: the government ceases to be a monopoly in space.

Businesses are looking for and finding new ways to profit beyond Earth.

Another important area that is now gathering pace is mining of natural resources that the humanity is able to reach through technology. In April, US-based company Planetary Resources announced its plans to develop asteroid mining to mine precious and rare earth metals. Among the investors of this initiative are the heads of Google, Larry Page and Eric Schmidt.

In the next year or two the first orbiting telescope will be launched to search for asteroids suitable for the development in outer space.

Other private companies will engage in mining operations in a vacuum. In the coming five to ten years, the company expects to move from the sale of seats on the supervisory space platforms to sell rights to develop asteroidal resources.

Only the asteroids approaching our planet that will be intercepted by earth machines can be considered suitable sites. They will be the objects with high gravity, which is a sign of the presence of heavy metals such as platinum, gold and uranium. Most likely, asteroids will have elements missing on Earth.