From June 20 to 22, the UN Conference on Sustainable Development, Rio 20, in Rio de Janeiro, will highlight the presence of more than 115 heads of state and government.  They will focus on discussions on the defense of the environment with sustainable development and social inclusion. Attention will be focused on the presidents François Hollande (France) Vladimir Putin (Russia) and Mahmoud Ahmadinejad (Iran), among others.

For the first time, Hollande, who took office in the last 15 days, will come to Latin America. In a speech in favor of sustainable development and efforts in search of the fight against hunger and poverty, the French have the sympathy of several Latin American presidents, including President Rousseff.

For the second time in the presidency of Russia, Putin is considered one of the main leaders of the world.  He promotes, along with China and Iran, actions to prevent military intervention in Syria - whose social and political crisis has been ongoing for the  last 15 months. Russian is also responsible for preventing the adoption of more restrictive measures against the government of Syrian President, Bashar Al Assad.

Ahmadinejad will travel to Brazil for the second time. The first was in 2009, when he met with then President Luiz Inacio Lula da Silva. His visit comes as Iran is to resume negotiations with the international community in trying to end the impasse over their nuclear program. 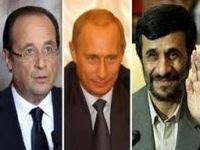