A workshop is to be held between May 30 and June 02 2012, on the Italian island of Stromboli, to detect potential risks from tsunamis in the Mediterranean, alert the population and divulge the proper protective behaviour, in one of the Mediterranean Sea's most exposed coasts to tsunami risk. 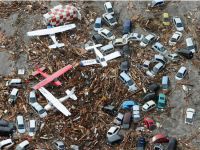 In the last five hundred years, there have been around two hundred recorded tsunamis in the Mediterranean area. According to the University of Bologna, on average there have been 15 tsunamis in Italy every 100 years for the last 4 centuries. The areas of greatest incidence are the Aegean, Ionian and Tyrrhenian seas, the sea of Marmara, along the Algerian coast and Cyprus, these being the most seismically and volcanically active zones.

UNESCO considers that there is a high risk of loss of life and economic disaster in the southern Mediterranean because of the strong population density along the coasts - 150 million people along 460,000 kilometres of coastline.

The workshop is funded by the European Union PPRD South Programme together with the Intergovernmental Oceanographic Commission (IOC) of UNESCO and the main objectives will be the implementation of an early warning system to detect tsunamis in the Mediterranean, to alert populations most at risk and to divulge the proper protective behaviour.

According to UNESCO; "The event will have the participation of 60 experts in risk management from the Euro-Mediterranean and Balkan countries , representatives of the national civil protection authorities of the Programme Partner Countries, the Italian Civil Protection, the European Commission, UNESCO-IOC, three Italian key research institutes and five Italian regions among the more exposed to the tsunami risk".

The workshop will inform the participants and the Mediterranean population that the NEAMTWS regional network of scientific institutes can detect earthquakes or underwater landslides which can cause a tsunami, and also identify potential impact areas, propagation, estimated time of arrival and issue of tsunami warnings to national authorities.