Asteroids are hazardous to Earth

NASA estimates that 4,700 asteroids may be hazardous to Earth 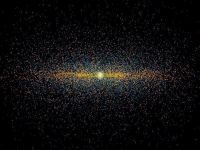 The WISE probe observed asteroids with orbits near the Earth that were big enough to resist passage through the atmosphere...

NASA estimates that there are 4,700 asteroids potentially hazardous to Earth, according to data from the WISE probe, which scans the cosmos with infrared light, the space agency said on Wednesday (16th).

The agency noted that the observations of WISE (Wide-field Infrared Survey Explorer) allowed a better assessment of the population of potentially hazardous asteroids in our solar system.

These asteroids have orbits close to Earth and are large enough to resist passage through the atmosphere and cause damage if they fall on our planet.

The new results were collected by Project Neowise, that studied, using infrared light, a portion of 107 potentially dangerous asteroids near the Earth with the WISE probe to make predictions about the population as a whole.

According to NASA, there are approximately 4,700 of them - with a margin of error of plus or minus 1,500, which have diameters larger than 100 meters.  So far, it is estimated that between 20% and 30% of these objects have been located.

"We made a good start in search of objects that actually pose a risk of impact with the Earth," said Lindley Johnson, Program Officer for Observation of Near-Earth Objects, developed by NASA.

However, "We find many and it will require a major effort during the next two decades to find all that can cause serious damage or be the destination of future space missions."