Koalas in Australia may disappear

Koalas in Australia may disappear in 50 years, says WWF 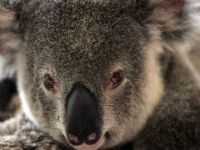 The population of koalas decreased 42% in the last two decades and has suffered from habitat loss and new diseases...

On Tuesday, the organization WWF warned that the population of koalas in Australia is in danger of becoming extinct within the next 50 years.

The representative of NGOs in Australia, Martin Taylor, said: "The population of koalas decreased 42% in the last two decades" and noted that if the trend continues, this marsupial that spends most of its time sleeping and feeding on Eucalyptus leaves can disappear.

Environmentalists attribute the decline in the number of koalas to habitat destruction - caused by human development and climate change - and the disease chlamydia. This bacterium, against which scientists are researching a vaccine, produces lesions on the genitals and the eyes of koalas, causing blindness and infertility and them being slowly consumed to death.

According to Taylor, the disease is linked "to the stress that these animals suffer" also under the pressure suffered by them in their habitat. The number of koalas in Australia ranges from 40,000 members to hundreds of thousands, according to estimates.

According to the biennial worldwide report Living Planet 2012, released today by WWF, the abundance of wildlife on the planet was reduced by 30% between 1970 and 2008, a figure that rises to 60% in the tropics. Last month, the Australian government cataloged the koalas as a "vulnerable species" on the list of threatened animals in areas east of the country.