Aliens are unlikely to resemble Earthlings

If aliens exist, it is likely to be very difficult for us to come into contact with them, according to astrophysicists. Recent studies of the so-called "habitable zone" around red dwarfs, the most common type of stars in the Milky Way, have shown that if there is life, it probably bears no resemblance to the one on Earth.

Eighty percent of the stars in our galaxy are red dwarfs. Of these, only 40 percent are Earth-like planets. Life on the Earth depends on the sun. What forms can it take on the planets orbiting around other stars?
First of all, the "habitable zone" around these low-mass stars must be very small - even smaller than the distance from the Sun to Mercury, the planet closest to the solar system. Can developed forms of life be formed in these conditions? The level of cosmic radiation there must be very high, and even the magnetic field of the hypothetical planets would not help. 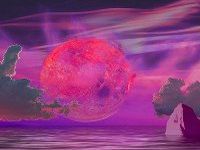 Another danger to life is the effect of "tidal Venus." It lies in the fact that the gravitational effects of the massive red dwarf can make the nearby celestial bodies very warm, denying them the chance of origin of life. In addition, due to the powerful gravitation of the star, a planet can always be turned one side to it, while the other side is turned towards space. As a result, one hemisphere is overheating, while the other one is freezing. Clearly, this also is not conducive to creating favorable conditions for the emergence of living organisms.

Meanwhile, the famous astronomer Seth Shostak, a head of SETI project searching for extraterrestrial life, drew attention of the researchers to the fact that on Earth there are microbes that can operate and thrive in conditions similar to those that hypothetically could arise on the planets orbiting red dwarfs. Life can adapt to extreme low or high temperatures or a fair amount of radiation.

As suggested by Shostak, individual organisms can survive even on too "hot" or radioactive planets, and not only terrestrial analogs of extremophiles. Due to the inflow of warm currents into the "cold" hemisphere, the temperature on the illuminated and un-illuminated sides of the planet can be aligned. The "dark side," however, can be covered with ice like our North Pole during polar nights, while the "light" side is cooled off by underground currents.

All this, however, means that in the first place marine life forms will develop, as the ocean currents would have little effect on the temperature on land. Therefore, terrestrial life on these planets is unlikely to achieve complex shapes. In all likelihood, land organisms "settle" at great depths where they are less vulnerable to external factors. However, they are unlikely to be even remotely like humans. On Earth, these creatures from a group of Archean bacteria are found in geothermal sources.

Sea creatures on such planets will certainly have more opportunities for development, but even if they emit the signal, SETI is unlikely to be able to catch it because nearly no water medium transmits radio waves. They are not accessible by very powerful telescopes either. One cannot observe the life in Earth's oceans from the lunar orbit, although the moon is not too far away from the Earth.
Even if these underwater inhabitants are intelligent, they will not be able to get in touch with us. In any case, it will not happen in the foreseeable future - until the Earthlings learn to fly to the distant planets.

According to Seth Shostak, planets with a weak cosmic radiation constantly rotated to the parent star give hope for the possible discovery of life. The scientist believes that if one side is too cold, but the other is too hot, somewhere in the middle there may be the zone of Goldilocks (habitable zone). Even in the polar regions of Mercury, there are areas with low water temperatures and ice. If Mercury had an atmosphere, it would be possible that there could be life there.

Shostak notes that it will not be easy to find life on Earth-like planets of the habitable zone of the Galaxy. Yet, this does not mean that it is not there.