Humankind was born in Africa and some fifty to sixty thousand years ago walked up from his birthplace around Lake Victoria and then moved en masse across the Middle East to Asia and then all flocked westwards to Europe, so the story goes. Or used to go. Nature Magazine claims that the deeper we dig, the more complicated it gets. 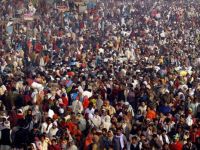 The Special issue in Nature Magazine entitled "Peopling the planet" focuses on the article by Tim Appenseller, called "Human migrations: Eastern odyssey" which claims: "Humans had spread across Asia by 50,000 years ago. Everything else about our original exodus from Africa is up for debate" and makes interesting reading, for it puts into question the peopling theory - how the Earth was populated with humankind moving en masse as a block from Africa to Asia to Europe and then into the Americas across the Bering Straight.

The exodus, according to the article, used to be placed at fifty to sixty thousand years ago, from Africa and entry into Europe placed at some forty thousand years ago. As they moved westwards, Homo sapiens sapiens slaughtered the Neanderthal. However, claims Nature magazine, it is far more complex than that and with every piece of research that is overturned, the more facts come to light challenging this theory.

While the article backs the theory that Humankind did start in Africa, it poses the question as to when the exodus began and when it ended. It illustrates the point with the fact that human settlements existed on the Arabian Peninsula 100,000 years ago and probably went further into Asia at that time, or before.

Evidence from Europe, the article continues, points towards the co-existence and even intermingling of Homo sapiens sapiens and Neanderthals - and another group, Denisovans, for many years. The Denisovans are named after the cave (Denisova) in which traces of them have been found in the Altai mountains of Siberia, dating from 30 to 50,000 years ago.

The more we know, the more we see that we know nothing.