Prime Minister Putin has recently unveiled the new Russian direction of exploration, in some ways it is both more ambitious and more modest than earlier. 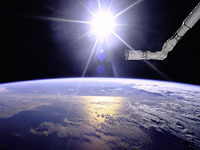 The crash of the Phobos probe, has caused Russia to pull back, temperarly from Mars and reset its sights closer to home. Some say that the crash in the computer systems were caused by bad design, by a rougher than expected take off or maybe even by US EMP pulses. The Americans are notoriously sore losers.

Either way, this has made several things obvious and has led to a general clearing out of the Russian space agency's leadership, as well as a new drive for a better launch site than the worn out base in Kazakhstan. Baikonur cosmodrome is old, worn out and the Kazakhs, ever greedy for more cash but not business savvy enough to figure out when the game is up, are demanding yet more and more for the rent.

Unfortunately for that third world oil based economy, they, like the Ukrainians, Belarus and Poles, who all though they had some form or another of leverage over Russia are finding out that they have been out maneuvered yet again. Just as North Stream maneuvered Russian gas out of the hands of Belarus, the Baltics and Poland, allowing Germans to actually sell gas to the Poles and set rates on a nation that was used to setting rates on Poland, and as South Stream is soon to allow the same to replace the Ukrainian games, so the new cosmodrome in Siberia's Vostochny, will allow Russia to cut the greedy Kazakhs right out of the equation.

The new unveiled facility, upon which construction is already under way and over $1 billion has already, out of a total of $10 billion, been invested, will contain a staggering eight launch pads, huge assembly and research facilities, as well as the latest in housing and accommodations for the crews, scientists and engineers who will inhabit it. Forty modern apartment buildings are now under construction.

This will also help repopulate parts of Siberia.

The first launch is expected in 2015, just 3 years from now.

The target of that first launch as well as the development of the next ten years, will be the Moon. The first probes will be to the Lunar poles, followed up by manned landings to study both the moon and crashed comets. Other landers will begin initial construction for future moon bases with a manned presence planned for the 2020s.

Finally, in related news, a company called Orbital Technologies is working out plans to put a private Russian space hotel into orbit. They plan to put the first module into space by 2016 and continue at a brisk pace from there on. There will be room for seven space tourists at a time, plus crew, as well as space for pharmacological laboratory and experiments.

CEO Sergei Kostenko, who is also head of the Russian office of the U.S.-based Space Adventures, stated that the cost of space tourism should drop from the present $60 million per trip, about 1 week, to a "mere" $15 million. Sure, its still out of reach of the vast majority of humanity, but its a start a one that will already cut costs by 75%.

Who knows, just maybe, in thirty years, a regular ride up on a space plane, to a Russian space hotel and than a slightly longer, day or two trip out to the moon, for some nice walks, scenic views and a pleasant round of golf? Why not?

The article originally appears on the author's blog, Mat Rodina. Reprinted by permission