Recent stories in the international press have derided Russia for animal rights abuses. How true are these stories and how fair are they for the tremendous efforts being made inside Russia to stop foreigners coming into the country and slaughtering the wildlife for trophies? 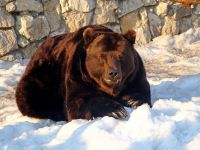 In 2011, WWF Russia launched a new initiative in which individuals and companies were invited to become foster parents for polar bears. In return for 30,000 RUR (around 1,000 USD) they would receive a certificate and a statuette and the money was invested in research and protection programmes for Russia's five to six thousand polar bears (around a quarter of the world's population of this species). To date, the estimate is that around 500 of these bears already have, or will shortly have, a foster parent.

Among the initiatives under this project is the Bear Patrol, in which local residents protect bears against poachers in the main areas of habitat: Far Eastern Chukotka Peninsula, Dikson Island in the Kara Sea, Vaygach Island in the Arctic Ocean and Kolguyev Island in the Barents Sea.

This followed a similar campaign to protect the Amur tiger and coincided with a ban placed on the polar bear hunt by Prime Minister Vladimir Putin. Now this year, the practice of hunting sleeping bears when hibernating has also been banned. Many of these hunters were westerners who paid thousands of dollars to shoot bears and have the trophy sent to them - the head and skin - either as they slept or just after they had been awoken from hibernation.

In conclusion, a lot is being done in Russia, at the highest level, to protect its wildlife from being poached, in many cases by westerners or Chinese.