The rhinos are about to be extinct because of poaching, and may disappear forever unless we do something now. New shocking statistics show that 440 rhinos were brutally killed last year alone in South Africa - an explosive increase compared to five years ago when only 13 rhinos had their horns cut off. 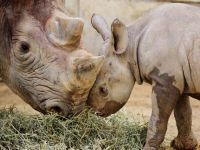 European nations can lead the world to a new plan to save these amazing creatures, but first they need to hear us!

Behind this is a devastating huge increase in demand for rhino horns, used by charlatans with cancer patients, false remedies for hangovers and as amulets in China and Vietnam.

Protests in South Africa have been ignored so far by the authorities, but Europe has the power to change that, demanding a total ban on trade in rhinoceros - from anywhere to anywhere - when countries meet for the next decisive international meeting in July.

The situation is so terrible that the threat came even to British zoos. They are on red alert because of gangs of rhinoceros murderers!

We are going to create a giant protest and demand through the European press that new security measures be taken to prevent the rhinos from becoming extinct. When we reach 100,000 signatures, our call will be delivered to Brussels, the heart of decision making in Europe, with a herd of rhino cardboards.

Every 50,000 signatures will be put on a cardboard rhino - taking the size of our movement to the door of the delegates of the EU while they position themselves. Sign the petition below and then forward this to everyone:

A rhino every day was killed in South Africa since January this year, home to 80% of the world's remaining rhinos. The horns now have a market value of over U.S. $65,000 per kilogram - more expensive than gold or platinum. The South African Minister of the Environment has taken measures, putting 150 extra guards and even an electric fence along the border with Mozambique to try to halt the attacks. But the scale of the threat is so serious that global action is required.

Unless we do something today, we could lose this magnificent and ancient species permanently. The Chinese are lobbying to facilitate trade and a ban on the rhinoceros horn trade will block their action.

With the EU's leadership, we can bring the criminals to international justice, put the hunters and thieves in jail, promote public awareness programs in key Asian countries - and put an end to the horror show of the horns forever.

In the coming weeks, the EU set its agenda for the international gathering that happens within a few months. It will be our best chance to turn the tide against this slaughter.

We know that the rhinos will be on their agenda, but only our pressure can ensure that they discuss the problem at its core. We are going to create a giant protest and take action in a spectacular fashion.

In 2010, Avaaz actions helped prevent the explosion of trade in elephant ivory. In 2012, we can do the same for the rhinos. When we act together, we can change the world - last year was the worst year ever for the rhino, but this may be the year that we will win this cause.