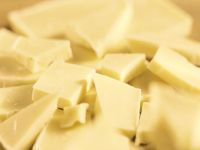 Each chocolate is one way. Because of the recipe, of the quality, type and manufacturer. But they all have the distinctive characteristic flavor of cocoa. In spite of similar consistency, white chocolate is different. It has a few nuances, usually very sweet and does not have such a taste in common. According to experts, it is because white chocolate is not chocolate.

Only the fat is separated from it when the result is pressed to make candy.  White chocolate may be called chocolate if, among other requirements, it is made from a minimum of 20% cocoa butter. When not officially "chocolate," many manufacturers, especially of mass-market white chocolate, used vegetable oil instead of cocoa butter, and the taste difference is significant.

Some people who say they do not like "white chocolate" may never have tasted the real thing. Real white chocolate is rich and creamy and tastes like chocolate. In addition to the minimum 20% cocoa butter, to be called white chocolate, the product must have a minimum of 15% milk powder and a maximum of 55% sweetener.