New evidence published by Nature magazine leads to some interesting insights into the life, health and lifestyle of the ancient Ice Man found in the Alps - Oetzi. DNA research has been carried out on what must be the most-studied corpse in history and the genome has been sequenced, leading to some startling revelations. 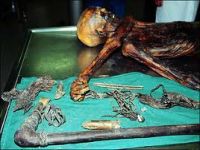 Oetzi, 5,300 years old, was found by mountain hikers in the Italian-Austrian Alps in 1991. Well preserved in ice, the body has provided some important information on pre-historic man. Now, we examine the man himself.

Nature magazine brings the news that the entire DNA sequence of Oetzi the Iceman from Tyrol has been published in Nature Communications and that the study of the genome gives important information as to the iceman's relations: from Sardinia and Corsica.

Oetzi had tattoos, he had tooth cavities, he had hardening of the arteries and before he died, he ate a nice meal of ibex - then he was felled with an arrow in the back. It is not clear whether he died from this or from severe head trauma - either he hit his head when he fell some distance after being shot with the arrow, or else died a violent death when his head was smashed by an assailant.

Albert Zink, head of the Institute for Mummies and the Iceman in Bolzano, Italy, leader of the sequencing study, stated to Nature: "We would like to know as much as possible about his living conditions, about himself and also his cause of death. We really tried to reconstruct a crime scene as much as possible".

The DNA sequence was taken from Oetzi's cellular mitochondria in 2008, and contained mutations which are no longer found today, making experts conclude that Oetzi came from a tribe or people that had since disappeared. The team led by Zink got further information by studying cells taken from a piece of Oetzi's pelvic bone, containing 96% of the Iceman's genome.

This led to the discovery that he had brown eyes, type O blood, was lactose intolerant, was athletic and active and almost certainly had Lyme disease (Tick fever).  It also led to the discovery that the mutations in his Y chromosome are most common among men from the Mediterranean Isles of Corsica and Sardinia, where it is known there was a prehistoric civilization, which at one time was present across the European Continent and disappeared, except on those two islands.

Nature quotes Copenhagen University palaeogenomicist Eske Willerslev, who states: "Sardinians are a group that people have considered distinct from other Europeans, and in this regard it would be interesting if they were more widely distributed in the past".