The Volgograd region is one of the most anomalous regions in Russia. There are areas in the region, where UFO sightings and other supernatural phenomena occur on a regular basis. Many local residents claim that they had been in contact with extraterrestrial beings and unknown creatures. 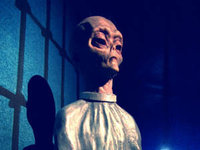 Svetlana, a resident of Volgograd, could see a UFO hovering above the maternity hospital in the town of Zhirnovsk several years ago. When the woman returned back home, she started having strange dreams. In her dreams, she could see a tall and handsome man wearing a glistening bodysuit. The man ordered her to quit her job, raise a loan, find an office and open a firm.

Svetlana's husband left her at first. He returned to her in a year, when she became a successful businesswoman.

Some time later, Svetlana saw two extraterrestrials in her dream. The humanoids told her that it was time to pay for her success. They told her that she would have to go with them for it.

Svetlana would never analyze her dreams before that. She thought that she became successful just because she was lucky. However, one fine day, as she was walking up the stairs to her apartment, Svetlana saw a glowing object in the window. The windowpane broke to pieces. The windows of her Audi vehicle, which was parked near the apartment building, got  covered with strange silvery dust.

There are some residents in Volgograd who say that they fell victims to sex aggression from the aliens.

A man named as Vladimir said that one day, when he went out for a cigarette break, he saw several women approaching him. For some reason, the man thought that the women were visitors on Earth. The women asked the man to follow them. They took him to a strange cylindrical construction, where one of the women performed an act of sexual intercourse with him.

Rimma, a middle-aged woman, was married four times. She had to divorce her husbands for one and the same reason. As soon as she would get in bed with her husband, she would feel the presence of another man there. She would have sex with that man after her real husband would fall asleep.

Are those stories true or not? Local ufologist Gennady Belimov believes that the stories told by those people could be realistic. What if aliens live among us?