The US State Department has withdrawn two grants, which Russian scientists won last year within the scope of the Russian Initiative program. No reasons were given for this unexampled decision. 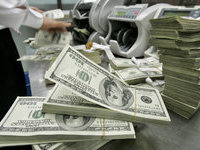 The fundamental research in the field of magneto-plasma aerodynamics was scheduled for 2011-2014. The work was supposed to be conducted at the United Institute of High Temperatures of the Russian Academy of Sciences. The grant of $2 million was wired to Russia. However, the US State Department vetoed the project, and the work on it was put to a standstill.

"The US State Department vetoed the grant after they made certain estimations about it. This has never happened before," Eduard Son, deputy director of the above-mentioned Institute said. "The Russian projects have been closed. One of them was about the control of spacecraft with the use of magneto-plasma aerodynamics," the official added.

Mr. Son found out about the recall of the grant from the letter, which was received from a partner organization - The International Scientific and Technological Center. The Center represents the interests of the Air Force Research Lab. The US-based laboratory sponsors research work within the scope of the Russian Initiative program. There were no reasons provided in the letter to explain the refusal to fund the project, Son said.

The Izvestia newspaper wrote that the Americans could deprive the Russians of the money because subject of their research was close to the military field. The Russian scientists work in the field of aerodynamics and hypersound. The point of the research is to study the the mechanisms of interaction between high-speed air flows and external electric and magnetic fields, Dni.ru website said.