True love in the zoo, sheep and deer? 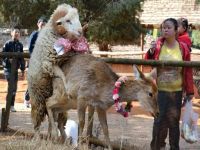 A zoo in the south-west of China marked the "marriage" between a sheep and a deer for Saint Valentime's Day commemorated as a day for lovers in several countries, informs the Chinese state-owned media.

According to the news agency China News Service, the Provincial Wildlife Park in Yunnan in Kunming city, was selling tickets for the "marriage" ceremony.

At least 500 entrance passes, valued at 66 yuan (U.S. $18) were offered for sale, according to China Daily. For the event, the animals would be dressed in "wedding clothes."

Despite his marriage, Changmao has not been exactly faithful to Chunzi. Last November, the zoo authorities separated the "couple" and took the ram to mate with a single sheep in the park, which gave birth to a cub.

However, when the zoo officials put Changmao with his son and the sheep, he became violent. Chunzi, in turn, squeezed through the fence to be near the ram.

The "couple" was created with a group of animals in the park. "We put them together because they are herbivores," said Liu Gencheng, an official at the park, according to Xinhua.

The staff noticed that the ram and the deer were warm to each other. Chunzi was often seen licking Changmao, and he attacked males who approached his "companion."

The couple became famous after a local television network carried a story about them.

Scientists are advising the public not to put too many meanings about the human-like behavior of the animals, saying leaving them alone is the best option.