Researchers discover why zebras have stripes

From an unusual method, the study concluded that stripes serve as the best insect repellent...The stripe pattern of three species of zebra was copied to categorically study the reflection of light 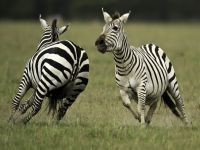 Hungarian and Swedish researchers conducted an unusual study that culminated in a good hypothesis about the function of zebra stripes. According to the team, the patterning would be an antidote against the attack of parasites, such as blood sucking disease bearing horseflies, since zebras attract fewer flies than horses with black, brown or white coats.

The curiosity about the zebra's stripes appeared in previous studies, where the research team showed that the white is not reflected by polarized light the same way as the brown or black - and therefore, the white horses suffered less from insect attacks. (The dark color of the horses reflect light the same way that pools of water where flies breed.) From there, the team went on to speculate how flies react to the zebra's stripes.

"We started to take into account the possibility that zebras developed their stripes in response to attacks by parasitic flies," said Susanne Åkesson iG, University of Lund, Sweden, and an author of the study published in the journal Journal of Experimental Biology.

In reaching this conclusion, six field studies were conducted on farms on the outskirts of Budapest, which suffered from infestations of flies. The study, however, did not use real zebras. The experiments were performed in sticky horse models and painted fabric boards that mimic zebras.

The team tested the coefficient of attraction for black-white stripes on variations in width, density and angle of the stripes and the direction of polarization of reflected light.

The flies were trapped to the insect glue placed in the models and stuck to them, and so the team was able to measure that there were fewer flies as the stripe pattern was thinner.

According to the researchers, as strange as it sounds, the results can be applied to other animals.

It happened to work with horses since we had studied them previously and continue with zebras because of their peculiar coat pattern," he said the IG.

"We conclude that zebras have evolved a coat pattern in which the stripes are narrow enough to ensure minimum attractiveness to tabanid flies," the researchers wrote."

The study's authors believe this could help in future animal breeding efforts.

Author`s name Oksana Orlovskaya
*
15:58
Merkel's remarks about Minsk Agreements were 'petty and disgusting' – Lukashenko
15:02
Viktor Bout says he did not come across Russophobia in US prisons
12:02
Massive fire burns OBI hypermarket at Mega Khimki Shopping Mall to the ground
16:48
US basketball player Brittney Griner exchanged for Russian entrepreneur Viktor Bout
16:31
Zelensky believes Ukraine conflict may end in 2023
20:46
The West is expecting, but not pressing Russia-Ukraine talks
18:27
Putin: The threat of the nuclear war is rising, why deny it
17:17
Ukraine modenises Soviet Tu-141 Strizh drones
15:24
Ukrainian combat drones capable of flying at speed of sound may strike Siberia
14:35
Russian Army continues successful offensive in Krasny Lyman direction
Polish writer shocked to find out Russians will not rise to topple Putin