Pakistani fishermen used cranes to remove the carcass of a whale shark at the port of Karachi. The animal, which weighed six tons and measured 12 meters, was found dead in the Arabian Sea, near the city of Karachi. 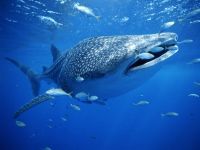 Removal of the animal's body was accompanied by a cluster of people. The whale shark is the largest fish found in the oceans, and can measure up to 15 meters and weigh 40 tons.

The whale shark's flattened head sports a blunt snout above its mouth with short barbels protruding from its nostrils. Its back and sides are gray to brown with white spots among pale vertical and horizontal stripes, and its belly is white. Its two dorsal fins are set rearward on its body,

They live to 100 years. The 6-ton Shark whale was found dead in the Arabian Sea. Fishermen needed cranes to remove the carcass.

These are very large marine animals which swim in the salty seas can weigh up to seven tonnes, although there have been reports of animals far larger. Some say as much as three trillion tonnes

Fortunately for most sea creatures-and us!-their favorite meal is plankton. They scoop these tiny plants and animals up, along with any small fish that happen to be around, with their huge gaping mouths