Ever thinning line between animals and humans

Studies on laboratory animals leave and enter the human sciences 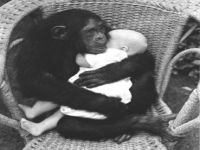 Disciplines such as philosophy and sociology begin to discuss the boundary between humans and other animals...

In universities, there was a time when animals belonged to the realm of science. Rats ran a maze in the laboratories of Psychology; cows mooing in the barns, monkeys stirred in cages in the departments of Neuroscience. Moreover, on the dissecting tables of undergraduate students, preserved frogs remained in a dead silence.

Across the campus, in the meeting rooms and classrooms of Liberal Arts and Social Sciences, where no monkey ration was ever served and all mazes are made of words, the attention of scholars was firmly established in human beings.

This semester, freshmen will attend a course at Harvard entitled "Humans, animals and cyborgs." Last year, Dartmouth offered the course "Animals and women in Western literature: fillies, cows and snakes." The University of New York offers the course "Animals, people and intermediate beings."

The courses are part of a growing field, but still undefined, animal studies. So far, according to Marc Bekoff, Professor Emeritus of Ecology and Evolutionary Biology at the University of Colorado, the area includes "anything that has to do with the way humans and animals interact." Art, Literature, Sociology, Anthropology, Cinema, Philosophy, Theater, Religion - there are animals in all of them.

The field, in part, is based on a long history of scientific research that has blurred the once clear distinction between humans and other animals. It has been shown that other species have linguistic aspects, use tools and even have moral foundations. It also derives from an area called Cultural Studies, from which the academy over the years, turned their attention to ignored and marginalized human beings.

Now, some scholars ask, why stop there? Why bow to the uncertain boundary that separates one species from all others? Some scholars have suggested that it is time to move toward the post-humanities.

The Institute of Animals and Society, which is only six years old, lists more than 100 courses in U.S. colleges and universities that belong to the broad banner of animal studies. While institutes, book series and conferences abound, there are formal academic programs appearing.

Wesleyan University, together with the Institute of Animals and Society, started a summer scholarship program this year. A program at Michigan State University allows students in MA and PhD from different areas to focus their research in the field of Animal Studies. At least two institutions offer degree courses in the area. And last semester, the University of New York initiated an Animal Studies program, allowing students to take courses in the area at the beginning of graduation.

Dale Jamieson, director of the program, said the activities related to animal studies had been "somewhat rough" so far, but he hopes the University of New York will help "make the field more cohesive and academically rigorous."

Obviously, scholars never ignored the animals. Thinkers and writers of all ages have been confronted with what separates humans from other animals and with the way we treat our distant ​​and not so distant cousins. This current explosion of interest in the subject is new, however, and scholars acknowledge that there are several reasons for the growth of the field.

Kari Weil, professor of philosophy from Wesleyan University whose book "Thinking Animals: Why Animal Studies Now?" whose book will be published in the first semester, said the behavioral and environmental sciences paved the way to give humans "the notion that we are a species among other species" - we, like other animals, are "subject to the forces of nature."

Think about the effect that, for the first time, the researcher Jane Goodall showed the world the social and emotional side of chimpanzees, which meant that it became almost impossible to keep them on the other side of the divide between humans and animals. Or watch the popular YouTube video in which a species of New Caledonian crows bend wire to make it a tool with which to eat a fish from a food container, and ask yourself what age a child would have to be able to solve this problem.

A more direct influence may have come from philosophy. The book "Animal Liberation" (1975), by Peter Singer, was a landmark in the debate against killing, eating and doing scientific experiments with animals. He questioned how humans could manage to make animals a part of a moral evaluation, how they could justify causing pain to animals.

Lori Gruen, Head of the Department of Philosophy at Wesleyan University and coordinator of the summer fellowship program in the institution's Animal Studies, said one of the main questions of philosophy is "to whom we should direct our moral interest?" Thirty years ago, animals were on the margins of philosophical discussions about ethics. "Now the animal question is in the center of discussions on ethics."

And it is in the public interest.

Jane Desmond, University of Illinois, cultural anthropologist who organized a series of lectures on animals at the institution, says that what happens in the public arena, and what happens at the university, has had a role in promoting a new attention to animals . There are concerns about the safety of the food chain, and popular books on the refusal to kill and eat animals.

"The habit of eating animals is an important subject of academic interest," Gruen said. "Since the time when most people interact with animals is when they are dead and are eaten, this is very much an issue," he added.

The animals with which humans live and feel love for are also an important issue.

Another philosophical lineage, exemplified by the French writer, Jacques Derrida, has exerted a strong influence on animal studies. He considered how animals think and why we distance ourselves from them. His writing is almost impossible to summarize in quotes, since it constantly rotates around itself, gaining intensity as he plays with the very language you use to write about what you are trying to understand. His approach has been adapted into a profusion of scholarly work.

In the book "The animal that therefore I am", for example, he discusses at length not only what he thinks of what he cats, but what he cats thinks of him. In one sentence - and thought - simple enough by his standards, he writes about the cat: "An animal looks at me. What should I think of that phrase?"

What do animals think - in fact, what they have to say - is something that scholars now take very seriously, recognizing, of course, that such an approach has its limits. As Weil said, referring to the gap between animals and people which was previously marginalized (the "others"), such as women or African Americans, "unlike those others, these others will not answer, whether by voice or by writing in a language recognized by the academy."

The academy, it seems, recognizes and understands Derrida and sometimes sticks to his word. Consider, for example, the article "Animal, vegetable and mineral: ethics as an extension of what is to come? The case of the becoming-plant," was published in a recent issue of The Journal for Critical Animal Studies.

Other publications are quite accessible. Moral arguments about the act of eating animals are clear. And there are texts to read which could benefit any citizen, such as "How pigeons became rats: cultural spatial logic and the problem of animals."

This variety does not reduce the energy or the importance of what is happening, but at least some of the people who work with themes that can be included in the sphere of animal studies, as Jamieson, University of New York, and Desmond of Illinois, believe that this academic effervescence still has a long way to go before animal studies become an academic field of clear outlines.

Desmond says such studies are still "not a field." They consist, according to the professor, in "an emerging academic community."