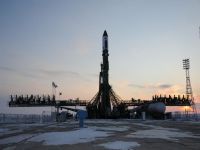 The Russian spacecraft Progress M-14M was launched late on Wednesday night (25th) from the Baikonur, Kazakhstan base toward the International Space Station (ISS), announced the Spaceflight Control Center (TSOUP).

The spacecraft was launched at 21h06 GMT, with a load of about 2.6 tonnes, mainly water and fuel, informed the Centers, which was quoted by Russian agencies.

Its arrival at the International Space Station is scheduled for January 28. Six men are on board the ISS at this time, three Russians, two Americans and one Dutch. The year 2011 was marked by some failures for the space industry.

The next departure from the International Space Station will come on March 16, when the outpost's current commander, NASA astronaut Daniel Burbank and two crewmates are due to return to Earth. They will be replaced by a fresh three-person team slated to launch aboard a Soyuz spacecraft on March 30.