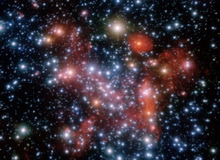 Big Bang scientists extrapolate a hypothetical scenario from a few facts. Yes, some galaxies are expanding, moving further away, but this is not the case with the entire universe. There are galaxies in the universe running perpendicular to the rest of the galaxies. That's contrary to Big Bang. If Big Bang really occurred, there should be a uniform distribution of gasses.

"The (galactic) structures discovered during the past few years, however, are so massive that even if CDM (Cold Dark Matter) did exist, it could not account for their formation" (Dr. Duane T. Gish, "The Big Bang Theory Collapses"). Furthermore, an explosion cannot explain the precise orbits and courses of thousands of billions of stars in thousands of billions of galaxies.

Some evolutionary astronomers believe that trillions of stars crashed into each other leaving surviving stars to find precise orderly orbits in space. Not only is this irrational, but if there was such a mass collision of stars then there would be a super mass residue of gas clouds in space to support this hypothesis. The present level of residue of gas clouds in space doesn't support the magnitude of star deaths required for such a hypothesis. And, as already stated, the origin of stars cannot be explained by the Big Bang because of the reasons mentioned above. It is one thing to say that stars may decay and die into random gas clouds, but it is totally different to say that gas clouds form into stars.

Most people don't realize how much disagreement there is among evolutionary scientists concerning their own theories. The media doesn't report those details, at least not to any substantial extent.

Excellent articles written by scientists who are creationists may be accessed at The Institute for Creation Research site at: www.icr.org.

The author, Babu G. Ranganathan, has his bachelor's degree with concentrations in theology and biology and has been recognized for his writings on religion and science in the 24th edition of Marquis "Who's Who In The East." The author's writings may be accessed at www.religionscience.com.