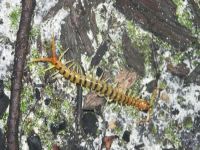 On the Australian island of Tasmania, two species of centipedes keep a mysterious impasse, according to new research - separated by a limit of 225 kilometers so that they rarely intersect.

The border, which measures only a few tens of meters wide in most areas, is particularly unusual, because the species boundaries generally follow a natural geographical division, such as a groove, explained the study's author, Bob Mesibov, expert on centipedes from the Museum and Gallery of Art, Queen Victoria, in Launceston, Tasmania. On the other hand, the limit in question also crosses mountains and rivers.

"They did not follow a natural geographic boundary in any way," said Mesibov, who discovered and named both species in 2010. He describes his findings in the journal Zoo Keys.

Mesibov spent two years mapping the varieties of the species. The study involved more than 100 days in the countryside and visits to 350 sites in northwestern Tasmania.

Abundant in their own territories, the two species of millipedes are difficult to distinguish. "They look like sister species," Mesibov said.

It is not known yet how the centipedes keep a boundary so well established over such a long stretch. Mesibov bequeaths the task of answering that question to other biologists, but suspects that the two species have some biological arrangement.

"It has nothing to do with the environment," he said. "It's something political that exists between the two species."

Meanwhile, he returned to his routine of work, focused on finding species of centipedes. So far, he gave names to more than 100.