Chinese company Lenovo, which is ranked second on the global market of personal computers, is entering the market of TVs, which is a new market for the company. 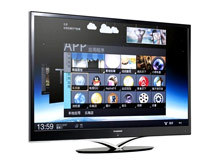 At CES 2012 show, which takes place in Las Vegas (Nevada, USA), the company introduced the first model of "smart" TV with Lenovo K91 Internet access. Nothing has been reported so far about the cost and the start of sales of the new TV panel.

The new device, which, according to various sources, is going to be sold under the brand name or IdeaTV or LeTV. The new TV will be a 55-inch LCD panel based on the IPS technology with 3D support, said Ferra.ru.

The performance of the "smart" TV works on the dual-core Qualcomm Snapdragon APQ8060 processor of 1.5 GHz. The processor is fast enough  for both HDTV on big screen, and for creating 3D-images.

However, the main feature of the first TV of the Chinese company is the pre-installed Google Android 4.0 (Ice Cream Sandwich) operating system. The platform will be responsible for all multimedia components of the device. The OS comes complete with Lenovo Sandwich UI interface.

Lenovo K91, of course, does not apply fully to the category of devices for Google TV, but it promises good opportunities for setting individual needs for consumers. The device will also be very good for surfing the Internet.

The functionality of the device also includes voice control plus face recognition options with built-in 5 megapixel webcam. Other features are as follows: 1 GB of RAM and 8 GB of internal memory for storing content. The internal memory can be expanded with the help of SD memory cards. The device is also equipped with Wi-Fi 802.11b/g/n module and Ethernet, HDMI and USB 2.0 jacks.

In addition, the Chinese novelty will be able to interact with brandname "cloud" services, including the app store (over 100 applications are preinstalled by default) and "on-demand" video.

The package, in addition to the traditional remote control, includes a wireless game controller. According to Lenovo officials, the "computer" opportunities of the TV can let people play the games, the quality of which is comparable to the games for consoles.