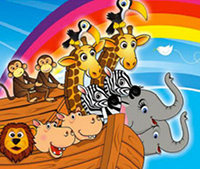 Noah's Ark has been a popular story for children, with its parade of colorful animals living in a floating zoo. But the small and cute boat often pictured in stories, toys, and games is so unlike the gigantic seaworthy vessel described in the Bible that it leaves a misleading impression. How could such a craft possibly have preserved animals and people through a real, historical global flood?

One example of this parody of the biblical Ark is a game for preschoolers produced by Rubik's Cube toy maker Ideal. The Noah's Ark Game looks innocuous enough, with a picture of colorful animals crowding the roof and deck of a boat barely large enough to hold them. But it misrepresents the Ark to such a degree that it undermines the feasibility of Scripture's account of the Flood.

Unbelievers often use their personal interpretations of the Noah's Ark account to try to demonstrate that the Bible is false, asserting that it would have been impossible to squeeze two of each animal species onto such a small vessel. But in reality, the Ark was longer than a football field and had more capacity than 500 railroad boxcars. And as engineer Tim Lovett illustrated, its dimensions struck the perfect balance between stability and comfort.

And not all "species" came aboard the Ark. Two of every "kind" of animal would have fit perfectly, and then the later generations that they produced after the floodwaters abated would have diversified into today's species over the last four millennia. Geologist John Woodmorappe estimated that about one third of the Ark was needed to house all the animals, even ones that have since become extinct like dinosaurs.

This left ample room for food and supplies, including space for plants that the Lord instructed Noah to take for food. This also fits with the Lord's instruction for Noah to build a window in the Ark, which could have supplied the plants with light.

So, the Ark described in the Word of God was sufficient to preserve specimens from all the land and air-dwelling animal groups, as well as Noah and his family. Cute Ark images similar to the one on the game box have appeared in various children's books and other toys and decorations. But they misrepresent the biblical account. And if parents never teach their children that this icon is false, then students are left with the wrong impression of the true nature of biblical history.