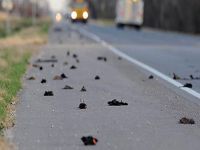 Rain of dead birds: Is Beebe Arkansas haunted or bewitched? Now this cannot be a coincidence. Almost a year to the day after we reported in this column a rain of thousands of dead birds in Beebe Arkansas, there are reports of a repeat of the event in 2012. The birds seemed to be crazed, as if they were driven by super-natural forces. What is happening in Beebe?

Remember the story "What is going on?" on January 5, 2011? (*) Almost a year ago to the day, we reported several strange incidents in the United States of America - 5,000 red-winged blackbirds plummeting to the ground in Beebe, Arkansas, 100,000 drum fish 160 km. away also in Arkansas and a further group of 500 birds just south of Arkansas.

Then there were other incidents in Chesapeake Bay, between Virginia and Maryland (a mass of two million fish floating belly up), Volusia County, Florida (thousands of fish) and a further mass kill of thousands of fish in Lake Azuei, Haiti. Then there was a reported incident in Canada, in which the authorities tried to cover up a bird incident and others in Brazil, the UK, Japan, Sweden and Thailand.

This year, back to Arkansas again and another mass bird kill incident and again, precisely in Beebe, and yet another rain of dead birds falling indiscriminately over the city. The first rain of dead birds occurred at around 19.00 on December 31, according to the local authorities.

Ah right, it was the fireworks. And the fish? Or was it a weather balloon?

Just what is going on in Beebe?