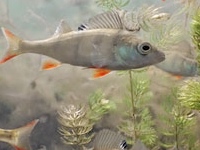 An international team of biologists recently reported on the supposed evolution of sound production in perch-like fishes. Researchers know that some fish cause their swimbladders to vibrate by using unique superfast muscles that produce, for example, courtship calls. How did these special muscles originate?

In a study appearing in the November 29, 2011, issue of the journal Frontiers in Zoology, researchers from Virginia Commonwealth University, the National Sun Yat-sen University in Taiwan, and the Université de Liège in Belgium compared supposed minor structural changes in the fish to the unobserved (but assumed) macroevolution-one kind changing into another kind-of whales from terrestrial animals and birds from reptiles.

A news release by VCU used vague terms such as "appears," "potential evolution," and "potential steps" to make the questionable case for how these fast-muscles evolved,  but the investigators presented no scientific answer.

Whether these rapidly contracting muscles are found in fish, snakes, songbirds, or bats, superfast-muscle evolution is still a mystery. For example, in the case of courtship calls, these fish would have had to wait generations for their muscles to evolve before they could make the calls to find a mate and produce offspring. But how could they produce offspring and survive if they were still waiting for the features necessary to make those calls?

Additionally, the fossil record doesn't show a clear series of ophidiiform fishes progressing to perciform fishes, but instead indicates that fish have always been fish.6 And, although there are different types of slow and fast muscle systems, fast muscles show no evidence of having evolved.

These muscles, along with a host of other well-designed features, had to be in place at the same time in order for these fish to survive. And "well-designed" means that a Designer was responsible.

Mr. Sherwin is Research Associate, Senior Lecturer and Science Writer at the Institute for Creation Research.