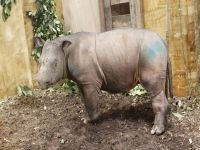 Found in Malasyia, experts want to cross a female Sumatran rhino with a male in captivity and increase the chances of a species that is threatened with extinction...

The female, called Puntung, was found in Borneo. There are fewer than 50 specimens in nature
Environmental authorities in Malaysia on Monday announced the capture of a young female rhino of Borneo-Sumatra, in what is considered the last chance to save this species in serious danger of extinction.

The captured specimen, a female between 10 and 12 years old, was caught on December 18, and is currently in the reserve Tabin de Sabah, on the Malaysian island of Borneo. Authorities hope that the female named Puntung, can mate with a male being kept in captivity.

"This is the last chance to save this species, one of the oldest among mammals," said the director of the Department of Wildlife of Sebah, Laurentius Ambo. Officials estimate that between 30 and 50 specimens of the Borneo rhinoceros remain free, a subspecies of the Sumatran rhino.