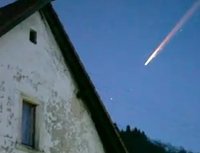 On Christmas Eve, residents of Western Europe could eyewitness a rare phenomenon in the sky at night. Among the stars, not far from Venus, a bright object was flying slowly. The object had a glowing tail so it looked like a comet.

The citizens of Belgium, France, Netherlands and Germany, who were lucky to witness the unusual celestial phenomena, launched a vigorous discussion on the web, saying that they could probably see Santa Claus with his reindeer flying over the EU. The object was observed at around 17:27 local time (21:27 Moscow time) on December 24, astronomie.info said.

Numerous videos of the curious object appeared on the Internet very quickly. The comments to the videos turned into the stormy debate about the nature of the origins of the unusual phenomenon. Many versions were rejected fairly quickly during the brainstorm. It could not be a meteor because it was flying too slowly. It was not a comet either: it was flying too fastfor a comet. Some  even thought at first that they could see a burning plane crashing.

Ironically, only a small part of those participating in the online discussion took the object for a UFO. The majority, noting the date, announced with certainty that it was Santa Claus and his reindeer flying in the sky. Some others said that it was the star of Bethlehem that shone in the German sky again. There were hilarious comments too.

Most rationally-minded Internet users immediately identified Santa as space garbage. After a while, it became known that it was the third stage of Soyuz TMA-03M rocket flying above Europe that night. The rockt was launched from Baikonur spaceport on December 21. On December 23, the rocket delivered three members of the new crew to the ISS.

"The fireball, which was observed over the territory of Belgium, the Netherlands and Germany, at about 17:30 local time on December 24, was the third stage of the Soyuz rocket, which was passing through the atmosphere," a statement posted on the website of the Royal Observatory of Belgium said.

The Strategic Command U.S. Armed Forces (USSTRATCOM) confirmed that the third stage of the Soyuz booster actually entered the Earth's atmosphere on December 24 at 16:26 GMT in the area of the 49th degree north latitude and 7th degrees east longitude.

"The Dutch press found themselves confused because of the phenomenon, - amateur astronomer sattrackcam wrote. - The police said that they talked to NASA, and NASA told them that it was a meteor or a comet. And this is what they say in the media now. I do not know whom they talked to at NASA - maybe to a janitor," the blogger wrote. The blogger also posted the diagram of the USSTRATCOM, which showed the calculated trajectory of the fall of the Soyuz TMA-03M stages.

The British press was no better. British reporters took the Soyuz booster, which flew to the ISS, for the Soyuz that failed to take Russia's Meridian satellite into orbit. Soyuz-2.1b blasted off on Friday at 16:08, Moscow time. The rocket was supposed to launch the satellite of the Defense Ministry. At 16:30, the debris of the satellite, which most likely exploded in the atmosphere, crashed in the Ordynsky district of the Novosibirsk region. A couple of fragments crashed into a house and a barn in the village of Vagaitsevo.