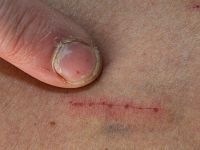 If we are what we eat, we do not know what we are eating, or the consequences of playing around with the genes of what we eat. Isn't there a possibility that there are potential dangers involved in consuming the unknown? How safe is transgenic food and is there a connection with Morgellons Disease? We name the culprit: Agrobacterium tumefasciens.

Morgellons Disease was labelled by Mary Leitao, a biologist in Boston whose two-year-old son developed sores on his lips and complained that he felt bugs crawling under his skin, before skin lesions broke out with fibers coming out of them, accompanied with the sensation of biting and stinging...Mary Leitao chose the name from the Letter to a Friend written by Thomas Browne in 1690 in which he described an illness which affected children in Languedoc, France, called the Morgellons, who broke out with "harsh hairs on their backs".

The medical system in the USA considered Mary Leitao to be in need of psychiatric assessment and found nothing wrong with her son...however his condition persisted and open sores broke out all over his body. Similar cases with the same symtoms have over the last decade swept across the USA, and the incidence has accompanied the increased use of transgenic foodstuffs and the spread of transgenic crops.

So serious was the incidence that the Morgellons Research Foundation was set up and by 2006, five years after Mary Leitao raised the alert, the Centers for Disease Control and Prevention (CDC)  formed a task force, which concluded that: "We're not ready to concede there's a new disease, but the volume of concern has stepped up because a lot of people are writing or calling their congressmen about it." By the following year, the CDC had opened the website "Unexplained Dermopathy (aka Morgellons)" to study the phenomenon, while researchers in the team declared they were keeping an open mind.

The ensuing study, conducted by the Mayo Clinic and published in the Archives of Dermatology on May 16, 2011 concluded that there was no skin infestation in the patients and backed the original thesis that Morgellons Disease was nothing more than delusional. It even has a name: Delusional parasitosis.

How convenient for the transgenic companies which manipulate the food we are eating.

However, other sources inside and outside the United States of America have reached different conclusions. One of these is the Brazilian researcher Dr. Geraldo Deffune G. de Oliveira, an Agronomical Engineer and member of the Brazilian Association of Biodynamic Agriculture, who claims that the disease does exist, the skin lesions do contain fibers, composed of aluminum and calcite and that the disease is more prevalent in the young and elderly. He has tracked down cases outside the USA to Europe, Asia and Africa.

The research carried out points towards Agrobacterium tumefasciens, an organism which has been manipulated through genetic engineering and one which creates TI (Tumour-Inducing) Plasmids, structures which carry or insert transgenic materials. What may have happened is that these agrobacteria, present in all soils and which easily acquire nucleic acids, have used this propensity to pick up genes and their mutants which can be pathogenic to human beings. Among these new acquisitions may be the viral promotors used in transgenic technology, which pass from the millions of tonnes of transgenic residue left on the soil whereupon they are absorbed by these agrobacteria.

Conjecture? Hysteria? Delusional parasitosis? Unexplained dermopathy? Not according to research work carried out by Dr. Vitali Citovsky from the State University of New York, whose work "Contribution of Agrobacterium to Morgellons Disease" (*) confirms the fears. The main areas of incidence in the USA are tracked down to Florida, Texas and California.

In this work, the lesions which characterise Morgellons Disease are documented, namely being "dysesthesias and dermatologic lesions" along with their symptoms, which "range from minor to disfiguring" and indeed include "non-specific pathology or an inflammatory process with no observable pathogens, often with fibrous material projecting from inflamed epidermal tissue". Even the composition of the fibrous material is documented: containing cellulose, it leads the researchers to believe that there is indeed involvement of the pathogenic Agrobacterium "which is known to produce cellulose fibers at infection sites within host tissues".

The researchers used PCR (Polymerase Chain Reaction) testing for genetic material encoded by the Agrobacterium chromosome, looking for virulent (vir) genes and T-DNA sequences, and their screening "indicated the presence of Agrobacterium genes derived both from the chromosome and from the Ti plasmid, including the T-DNA, in tissues from both Morgellons patients".

"Conclusions: Our preliminary results indicate that Agrobacterium may be involved in the etiology and/or progression of Morgellons disease. If these results are confirmed, it would be the first example of a plant-infecting bacterium playing a role in human disease.

"Further testing is ongoing to validate this observation and to determine whether Agrobacterium not only resides in the infected areas, but also transforms them genetically".

If that is not conclusive then the research update is:

What next? Watch this space. Too many billions have been invested in this massive laboratory experiment spreading what appear to be toxic and pathogenic agents across the Planet for the scheme to grind to a halt. I suspect there will be another hacking attack against this article. As for the researchers...

Ladies and gentlemen, welcome to the twenty-first century.