The mysteries of shamanism can never be unveiled 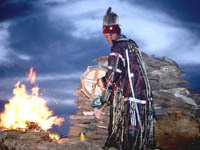 The shaman as researchers see it and the real shaman are two absolutely different people. Shamans have never unveiled the mysteries of the black faith to strangers. They have never opened their names to anyone ether. Shamans are not only healers and spiritual conductors. They were also chroniclers. Pravda.Ru learned a lot about the phenomenon of shamans from Yakutian ethnographer Sergei Alekseev.

"The road to shamanism can take a lifetime. Each Evenki clan used to have their own shamans before. No one has ever trained shamans - the initiation would always take place itself. No one knows why it happens. I personally come from the Evenki clan of Deer People. We consider the great white deer our ancestor. I remember that when a child, we used to spend nights with our grandmothers and grandfathers. I remember that my grandfather would often take our white deer somewhere. I asked my granny what the granddad was doing with the deer, but she could only say that it was not up for a woman to know that. There was a line between the things that men and women would do. Women would never do the work of men and vice versa."

"What about the outlook of the Evenki people?"

"We believe that each thing in this world has its spirit, its nature, its aura, its biological field. For example, you and I are wearing glasses. Our glasses also have their own auras. If I wear your glasses, I will be looking at the world with a different pair of eyes. It was you who bought these glasses, so they have absorbed your aura and your biofield. My glasses have mine. We never pass our things of one generation to another. For example, I have a hunting knife, but I am not giving it to my son, because my son must have his own knife. My knife is my knife only. When I die, they will put my things next to me."

"How do you raise your children?"

"Each person is born free. Each human being must live freely. We raised our children with our rituals, traditions and customs. It is generally believed that when a child is coming of age, he or she is supposed to participate in a special ritual. The Evenkis did not have that. In our culture, a boy becomes a man when he kills a moose in the taiga - when he does that alone."

"Did you have any special rituals for that?"

"No, we didn't. When he goes to kill a moose, he performs all the rituals himself. We had group rituals, but they were not about everyday life routine. They would be performed when people would see their relatives after a long winter. Rituals would be performed during wedding ceremonies, and so on. There are no rules that you can follow to become a shaman."

"Do the Evenkis conceal anything from ethnographers?"

"When an ethnographer wants to interview someone, they prepare questions for the interview. The Evenkis are very open to other people, but they will never unveil their sacred mysteries to anyone. How does a man become a shaman? For example, he becomes ill and starts performing some manipulations. It may seem that he is going insane, but no one thinks of that man as a madman. No one will even help him, because there is no help here. A man can see and hear the things that we do not see and hear when this man remains in the state of initiation. They often say that hungry spirits torture and dismember the body of a shaman, and then they put his body together again. Nothing is known for certain. A true shaman will never unravel the nature of his becoming of a shaman. This is a mystery.

"The Evenkis don't know much about the shamans. When we were children, we did not have shamans in our villages. We had people who were doing shamanism. They called themselves little shamans. A person can not be born as a shaman, it comes spontaneously. If a person discovers some gift of a shaman in him, he may leave his clan for a while. Then, he returns. When people ask him about where he was, he tells them that he has become a shaman, and other people treat him as a shaman after that.

"What did Evenki shamans normally do?"

"They were mostly healers. But they were also very strong shamans - strong in every respect. I had a grandmother, her name was Natalia. She died when she was 105. She was the healer of our clan. She was very wise, although she was illiterate. She could also predict future. When she was young - that was the time before the Soviet power - she said: "Blue-eyed people with long noses will come and they will start cutting trees down. Beware of them." We would just laugh at her, we did not believe that something like that could happen. It could never occur to us that people could actually begin to destroy the taiga. Another fortune-teller told us that those people would come on iron horses and that they would move mountains."

"You are a historian and an ethnographer. Have you ever tried to conduct archeological excavations?"

"I am an Evenki man, and I can not touch ancient things. Most ancient Evenkis used to say that they originated from trees. When they would die, other people would keep their bodies inside hollow trees. They would burn that tree in a year, and people would never come back to that place. Nowadays, when we bury our relatives, we do not maintain their graves. Other people often ask me why we never go to the cemetery. I just tell them that those people had left our world. We believe that if a person dies, they are not supposed to be bothered. We do not bother their spirits.

"What stories do the people of older generation say about the arrival of the Russians in the taiga?"

"Our ancestors describe the Russians as fair-haired and blue-eyed people who had fire sticks. At first they thought that those newcomers were wizards that had magic wands that could kill people and animals. My ancestors did not have rifles for a very long time because of their pagan faith. The faith did not allow them to have the stick that could kill other beings at a distance. They thought it was witchcraft. When we lived in the taiga, everything was absolutely quiet around. There was no noise at all. Nothing could bother the spirit of the taiga.

"Did ancient people have sacral names?"

"The Evenkis had several names. One would be given to them at birth. Another one would be given after the killing of the first moose, and so on. A person did not have only one name for which he or she would be known for life. This is not a mystery, it is connected with changes that take place in the life of a person. The Evenkis believed that if you bring good to your clan, then you are a respectable person. If you don't do anything special, you are a common member of the clan. You will not be disrespected, of course, but the name of a good hunter will be known all across the taiga. That is why people would give special names to special people so that others would know that he or she is special."

"How would you characterize the complicated religious world of Yakutia, which combines Orthodox, Muslim and ancient religions?"

"My grandmother had icons. She would pray and cross herself, but she didn't stop believing in spirits. If there was no priest in a village for baptism, a local shaman would conduct the service instead. We have no religious conflicts. There are local Russians, local Tatars. The Tatars pray to Allah, the Russians believe in Christ, we have our spirits in the taiga. Modern people do not stick to that, of course, but the local people perform ancient rituals when they go hunting or fishing. When I was young, I could hardly believe all that. But the more I live, the more I become convinced that there are spirits in this world, indeed."