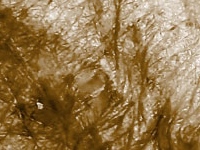 Many believe that fossils represent organisms that died millions of years ago. Scientific literature, however, contains dozens of well-described original soft tissues in fossils. Since laboratory tests have shown that organic tissues decay in only thousands of years, these fossils have been at the center of much heated controversy.

The scientists publishing these results have suffered no small amount of persecution from staunch defenders of an old earth, even though they hold the same basic evolutionary beliefs. Now, a pair of scientists is attempting to bypass the standard peer-review process and employ a new protocol for researching what may be mummified skin on hominid fossils.

Paleoanthropologist and explorer Lee Berger promoted the idea that certain extinct ape fossils discovered near Malapa, South Africa, in 2008 show what early man looked like long ago. He noticed that some portions of the fossils are uncommonly well preserved. He told BBC News, "It looks like skin; it's in the right position to be skin-but extraordinary claims require extraordinary evidence."

But why would this skin be extraordinary? And why could Berger not simply report what he observed, as one would expect from an impartial and objective scientist?

Instead, he and colleague John Hawks of the University of Wisconsin in Madison began the Malapa Soft Tissue Project. Its goal is to entice "the participation of a broad cross-section of people who have the skills and ideas to add understanding to possible soft tissue evidence from a 2 million-year-old hominin site."

The project proposes to conduct "open science" and avoid "science done by a closed process," but Hawks' website left those phrases undefined. He seems to consider normal research and publication procedures to be "closed," but these processes did referee the empirical scientific discoveries behind the world's current technology, proving their effectiveness in that context. So, are these two scientists really objecting to the way science is accomplished, or is there a different reason for their project?

In an introduction to the Malapa Project, Hawks wrote, "The suggestion [of a two million year old skin] is obviously surprising. Many readers will remember how much controversy surrounded claims about soft tissue preservation from dinosaurs several years ago."

It appears that their new approach is designed to help avoid this controversy. But because there is simply no reasonable way to interpret original soft tissue fossils in a context of millions of years, their new tactic probably won't be able to "add understanding" or sidestep the fundamental contradiction between the scientific observation of labile soft tissue fossils and the faith-based historical concept of "millions of years."

The Malapa Project's proposed changes to the process of standard scientific peer-review, though possibly yielding other benefits, likely will not be able to circumvent the plain observation that if this "two million-year-old" fossil has mummified skin, then it is not two million years old.