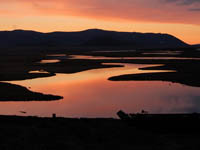 There are numerous lakes and ponds in Russia and CIS countries associated with sacred and pagan traditions. Some have to do with Christian shrines, while others have been revered since ancient times by local people as sacred and were used for worship and various ceremonies.

The most common are legends of the sunken churches coming up in various places. They say that there is a church at the bottom of Svetloyar Lake located in mysterious town of Kitezh in Novgorod region. The legend of its origin says that once a pagan goddess Turk rode here on her spirited horse and flogged people for their sins. She then sank into the ground with the horse, and at this place appeared a lake, and Kitezh-grad grew on its shores.

They say that later, during the invasion of Batu Khan to Russia, a local prisoner, unable to bear the torture, undertook to show the Tatar-Mongols secret approaches to Kitezh town. But the residents were praying, and the town sank to the bottom of the lake, along with all the houses and churches. Another version of the legend states that Kitezh went under water in an era of secessionism.

Either way, local residents and tourists who visited here argue that sometimes one can hear the sound of church bells from the depths of the lake, and sometimes one can even see a reflection of an ornate church in the water. The water from Svetloyar allegedly cures diseases.

Researchers have sought to find the underwater town of Kitezh they call "Russian Shambhala", but to no avail. It seems that this town can be seen only by select few.

Similar stories are told about other Russian waters. For example, there is Lake Svyatovskoe in the Tambov region that likely is of meteoritic origin. They say that it is bottomless (ropes with a load never get to the bottom), and that many fishermen found their death there. Once a church sank in the lake, and now one can sometimes hear the bells from under the water.

Legends of a church sank in the water are told about Svetloye Lake near Zhukovka (Bryansk Region). From the bottom of the lake at times one can see strange light beams.

There is Grebenitskoe Lake in Vitebsk region of Belarus. On May 28, 2004 a group of young people from the village of Liozno had a party at the lake and was taking pictures. Nothing unusual was noticed, but when later the film was developed, it appeared that in some frames one could clearly see the outlines of an unknown church with something similar to an icon on the background.

There are no churches near the lake. The pictures were given to a history teacher from a local school who went to Minsk to get them to the researchers. But scientists could not explain the phenomenon. Priests told her that it was "a miracle of God."

After learning about the miracle, journalists flocked to the lake. However, nearly all of them had problems with their equipment at the lake. Such cases are common when trying to research abnormal phenomena and can be explained by the presence of a strong electromagnetic radiation.

What does this miraculous temple symbolize? In this area there is a legend about a church that in the distant past fell through the ground. It was located seven kilometers north of the lake. They say that the church fell through right at the time of service, along with all the praying. Sometime later it began to rise from the ground. One day a shepherd boy stepped on the spire sticking out and hurt his foot. Peasants tried digging the area, but just as the saw the dome, the church once again went underground and took the diggers along.

However, it is unclear why the mirage was observed on the lake. It is not ruled out that these mirages can "broadcast" from a distance.

On the shore of Lake Saint (Arkhangelsk region) there are wooden Orthodox crosses where people tie pieces of cloth. It is believed that if one ties a piece of cloth to a cross and makes a wish, it will come true. This is a cross between Christianity and paganism, which is characteristic for the Russian people.

In the Khanty-Mansi Autonomous Area there is a lake allegedly inhabited by a gigantic sacred serpent yalpyn-ui worshiped by the locals - Mansi. On sunny days, the snake's skin glistens in the sun. Every June, Mansi conduct their pagan rituals on the lake. The tradition has been preserved to this day.