Asteroid Vesta has a mountain three times higher than Everest 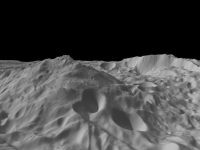 NASA probe studies reveal the topography of the celestial body, which can also help in understanding the formation of the Earth

The asteroid Vesta is home to a mountain three times higher than Mount Everest, according to a new image taken by NASA's Dawn spacecraft. Located in the center of a crater on the south polar region of the asteroid, the mountain is about 22 kilometers in height and has a base of approximately 180 kilometers - in contrast, the highest mountain in the solar system, Olympus Mons on Mars, is 25 kilometers high and spans 624 kilometers. And Everest, the highest elevation on Earth, is 8,848 meters.

"Vesta is full of surprises," said Paul Schenk, a scientist participating in the Dawn mission of the Lunar and Planetary Institute in Texas, during a news conference. He added: "We had indications before the arrival of the Dawn spacecraft that the south polar region would be interesting. Hubble photos showed a ripple there, but with the resolution it was difficult to know what it was."

With the resolution of the Dawn spacecraft, the scientists were able to see that the ripple was an impact crater - called the Rheasilvia Basin - about 475 kilometers wide, dominated by its central mound. ''Vesta is really a small world quite unique and it exceeded our expectations,'' said Carol Raymond, deputy principal investigator for NASA's Jet Propulsion Laboratory (its acronym in English, JPL) of NASA during the conference. 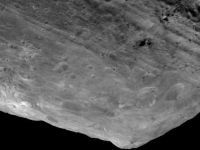 About 529 kilometers wide, Vesta is the second largest body in the main belt of asteroids in the solar system, a ring of leftovers from the formation of the solar system located between the orbits of Mars and Jupiter.

Using high-resolution images taken from Vesta, JPL scientists have created an image that gives an angular view of the south polar region of the asteroid and highlights its three-dimensional topography.

Vesta: a view of Earth as a baby?

Studying characteristics such as the giant polar mountain on Vesta can help scientists trace the geological history of the asteroid, possibly giving clues as to how our solar system was formed.

Previous research on meteorites and Vesta showed that the surface of the space rock was once covered by basaltic lava, giving a hint that Vesta once hosted a global ocean of magma similar to what existed on the Moon.

In fact, Vesta is considered a protoplanet - a planet baby whose growth was stunted by gravitational interactions with Jupiter, the gas giant we know today.

The results of the Dawn mission, according to NASA, may provide clues as to how rocky planets like Earth and Mars might have looked in the early days of the solar system. "We're discovering - and we hope to further document - that Vesta underwent planetary processes," said Raymond.

The Dawn spacecraft went into orbit around Vesta in July and will spend a year gathering data before moving toward the dwarf planet Ceres, the largest body in the belt.