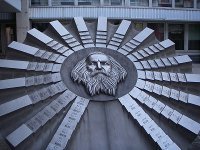 There are plenty of myths surrounding the great Russian scientist Dmitry Mendeleev. They say that he first saw his famous periodic table in his dream, and that he was the one to have decided that vodka should be forty degrees. However, all this is no more than myths. There is a possibility that the brilliant scientist partook in the creation of some of them.

Most likely it is impossible to find a Russian who has no idea what the periodic table is. One way or another everyone came across it at some point - at least for schoolwork in chemistry. Nearly every Russian heard that the scientist first saw it in his dream.

At the beginning of 1869, Dmitry Mendeleev was very close to discovering one of the fundamental laws of nature - the periodic law of chemical elements (strictly speaking, the above mentioned chemical table is just a graphical display of the law). However, at the last stage of his work everything went wrong. He could not arrange the known chemical elements in a way so that they reflected the changes in their properties associated with increasing atomic weight.

The exhausted scientist at some point fell asleep at his desk and saw in his dream that same table that he could not create in reality. Waking up, Mendeleev quickly drew it, then reviewed the scheme and realized that this was exactly what he was trying to create in the past three days.

This story can be found in many reference books and journals, including those devoted to the history of science, as well as heard from school and college chemistry teachers. Millions of people believed and still believe in this story, unaware that it is a typical myth.

To begin with, Mendeleev has never mentioned the "wonderful dream" neither in his diary nor in letters to his friends. There is, however, the message of his friend, a famous geologist, Professor of the University of St. Petersburg Inostrantsev that once Mendeleev told him the following:

"Clearly I dreamt a table where the elements were arranged as needed. I woke up and at once wrote it on a piece of paper and went back to sleep. Only in one place an amendment was subsequently required." Later Inostrantsev often brought the story up to his students as an example of a "psychological impact of intensive work of the brain on human mind." Apparently, the first distributor of this myth was precisely Inostrantsev and his students.

Mendeleev never confirmed this when dealing with the press and other scientists. Moreover, some of his statements directly contradict the hypothesis that the table was created at once. For example, when asked by a reporter about the origin of the periodic table, he answered that he had been thinking about it for twenty-five years. His colleagues remembered that the great scientist worked on the table continuously for several years, and that there were several versions of it. Incidentally, Mendeleev continued adjusting it after the issuance of his work on the periodic law. Mendeleev was not the first scientist to suggest such a table. In 1864 a German scholar Julius Lothar Meyer published his table containing 28 elements, placed in six columns according to their valencies.

An attempt to link the properties of elements with their atomic weights was suggested in 1866 by an English chemist John Alexander Newlands, who arranged his elements in a table as well. Although both of these ways to systematize the elements were later found faulty, Mendeleev was familiar with the data in these tables, and therefore he always had examples before his eyes.

But why did Mendeleev told Inostrantsev that he saw the final table in his dream? If this conversation did take place (which is very doubtful), then perhaps, the great chemist was just kidding, but Inostrantsev took the story at face value. Everyone who knew Mendeleev would say that he had a peculiar way of talking - no one could understand right away whether he was joking or talking seriously. If so, it turns out that Inostrantsev is not the author of the myth of the table seen in a dream and it is the creation of Mendeleev.

Why was this myth so popular? Perhaps, because for many people removed from the world of science the real methods of constructing scientific theories are generally unknown. They do not know what a scientist should do in order to make a discovery. Yet, everyone heard about prophetic dreams. To the layman this order of things seems more natural, and, accordingly, easier to believe.

Another myth that many believe is that it was Mendeleev who set the standard for Russian vodka at forty degrees (allegedly in his doctoral dissertation "A Discourse on the combination of alcohol and water" it was mentioned that such proportion was the least harmful to human health). However, one of the inscriptions on a stand in the "Museum of vodka" in St. Petersburg says that Mendeleev regarded the ideal strength of vodka to be 38 degrees, but this number was rounded to 40 to simplify the calculation of the tax on alcohol. Furthermore, this myth is widely used for promotional purposes. For example, the label of "Russian Standard" says that the vodka is "compliant with the highest quality of Russian vodka approved by the royal government commission headed by Mendeleev in 1894."

However, all this is no more than a myth. First, Mendeleev's dissertation has no mention of working with an alcoholic solution of 40 degrees. The researcher studied higher concentrations of alcohol - 70 degrees and above. Moreover, there is no published work of Mendeleev related to the methods of diluting alcohol in vodka production. Second, "40 degrees" standard was established in Russia in 1843, when Mendeleev was only nine years old. It was introduced by the government without the involvement of any scientists and excise commissions.

This standard has been established because at the time the excise tax on alcoholic beverages was calculated based on each degree. Consequently, the strength of the drink in each case had to be individually measured, and the scale of measurement was very accurate. In addition, it appeared that on the way from the producer to consumers vodka had a property to lower its degree (meaning, the speculators just diluted it and sold as non-diluted).

In order to prevent this from happening and simplify the procedure for levying excise taxes, the government issued a decree (of course, without asking schoolboy Mendeleev) saying that vodka was supposed to come to the consumer exactly at 40-degrees (minimum - 38 degrees). Otherwise, those who committed the unlawful act would face criminal liability. Due to the fact that in Russia of Nicholas the First criminals were punished as prescribed, in less than a year vodka was forty degrees in most pubs and retail shops.

As for the "vodka" commission, in reality it was formed at the suggestion of Witte not in 1894, but 1895. Mendeleev spoke at its meetings at the end of the year only about the excise, and never said a word about the "standard forty degrees." 1894 appeared on the label apparently due to an article by historian William Pokhlebkin, who wrote that "30 years after writing a dissertation ... he agreed to join the commission." Manufacturers of "Russian Standard" simply added metaphorical 30 to 1864 and came up with 1894.

All this is just a myth, which, however, does not take away the laurels of Mendeleev as one of the most brilliant chemists in the history of mankind.