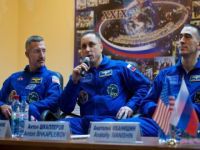 A Russian spacecraft took off from a base in Kazakhstan and is expected to dock with the International Space Station on Wednesday...

The Russian spacecraft Soyuz TMA-22 with three crew members on board, took off on Monday toward the International Space Station (ISS), at a time when Russia tries to restore confidence in its space program after the recent accident of a cargo ship and an unsuccessful launch.

"The spacecraft has reached orbit," said Anton Shkaplerov, flight engineer, in a radio message at the Mission Control Center in a suburb north of Moscow. There was applause when the crew gave a "positive" thumbs up signal for the cameras on board the ship.

The launch of Soyuz TMA-22 occurred at 2:14 a.m. (GMT) with the help of a Soyuz FG rocket from the Baikonur base in Kazakhstan and was broadcast live on Russian TV channel Rossiya 24. The takeoff was the first since July, when NASA shut down its space shuttle program of 30 years duration, having been announced every few years.

During this interval, the 16 nations that have invested $100 billion in the space station will depend entirely on Russian craft and crew members.

The mission, originally scheduled for September, was postponed because of security fears after the unmanned Russian craft, Progress, carrying supplies to the station crew, exploded in August, one of the worst accidents to the Russian space program in decades. 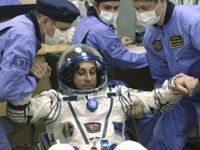 The crew rejected security concerns before the launch, which left an orange trail blazing in the sky in the steppes of Kazakhstan.

"We have no negative thinking. We have faith in our equipment," said Shkaplerov before launch, according to Russian news agencies.

In a report made to Mission Control after takeoff, he said the crew was "feeling good". A small plush bird inspired by the mobile application "Angry Birds," a mascot Shkaplerov received from his 5 year old daughter, floated above the crew.

"Except for the bad weather in Baikonur, everything went extremely well," said Vladimir Solovyov, head of press releases from the space station's Russian segment, to Mission Control.

Almost nine minutes after launch, already in orbit, the spacecraft began its flight towards the ISS, where it is docking at 3:33 a.m. (EST) on Wednesday, said the Space Flight Control Center to Russia's Interfax news agency.

Currently, the orbital station has three crew members: American Michael Fossum, Russian Sergei Volkov and Japanese Satosi Furukawa. Any problem in leaving the ISS space station empty for the first time in more than a decade after the three crew members returned to Earth later this month is now resolved.